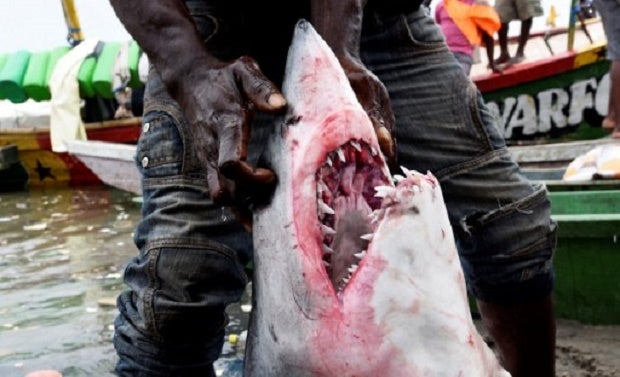 This file photo taken on September 29, 2016 shows
A fisherman lands a shark at the local fishing harbour in Abobo Doume, Abidjan.
Sharks may elicit less sympathy than elephants or rhinos, but experts say the feared predators are under fierce pressure from unmanaged commercial fishing and desperately in need of further protection. AFP

JOHANNESBURG, South Africa – Sharks may elicit less sympathy than elephants or rhinos, but experts say the feared predators are under increasing pressure from unmanaged commercial fishing and desperately in need of further protection.

Unregulated fishing and international trade in shark products for human consumption have led to a precipitous drop in numbers.

An estimated 100 million sharks are killed every year, according to an authoritative 2013 study, an amount that conservationists say threatens the survival of many shark species.

Sharks are slow-growing and slow to reproduce, and the market for their body parts – especially fins and gill plates – are driving overfishing.

Sharks are also hunted for their meat, skin, liver oil and cartilage, as well as being accidentally caught by industrial “longline” fishing.

The Convention on International Trade in Endangered Species (CITES) conference, which is under way in Johannesburg, is to vote on whether to increase protection for the silky shark and three species of thresher sharks.

The decision would put them into the CITES “appendix II”, which bans all trade in parts, unless under stringent conditions.

“The demand particularly for fins, for meat and gill plates is higher than ever,” warned Andy Cornish, an expert on sharks at the World Wildlife Fund (WWF).

“Many countries have no management whatsoever for sharks – anybody can take whatever they want.

“Even in some countries that have regulations, they are not well enforced, and as a result, 25 percent of sharks and rays and their relatives are threatened with extinction.”

Fiji, Sri Lanka and the Maldives, which rely on marine life for tourism, are leading proposals to have 13 threatened species of shark and rays given stronger CITES protection.

“Sharks are a vital ecological part of the ocean fabric and rays are keystone species, so we need to protect them,” Dan Ashe, director of the US Fish and Wildlife Services, told AFP.

“Silky sharks, thresher sharks and the devil rays are being unsustainably harvested.”

Fins are the most valuable part of sharks, with shark fin soup often consumed at prestigious banquets in China, Hong Kong and Singapore.

“Finning” — slicing off shark fins while they are alive and tossing them back into the water to die — has been banned by many regional fishing bodies, but still occurs in parts of south-east Asia.

According to the Wildlife Conservation Society (WCS), sales of shark and ray meat rose 40 percent in the decade to 2011.

In 2003, basking sharks and whale sharks were the first sharks put onto appendix II, and following the last CITES meeting in 2013, a total of eight species of sharks and all manta rays were included.

Ten years ago, Hassiem, a lifeguard, lost half his leg when a great white shark attacked him in the sea off Cape Town.

He has since become a Paralympian swimmer — and an advocate for conservation.

“I think movies that portray sharks as man-eating monsters do a huge disservice to sharks,” the 34-year-old told AFP.

“As top predators in the oceans, they play a crucial role in the food chain. Without them, there is an imbalance that funnels right down to the coral.”

If the CITES shark proposals are adopted, shark catching countries will be required to regulate fishing and issue export permits to ensure sustainability in the wild.

The conference in Johannesburg, which ends on Wednesday, is sifting through 62 proposals to tighten or loosen trade restrictions on around 500 species.