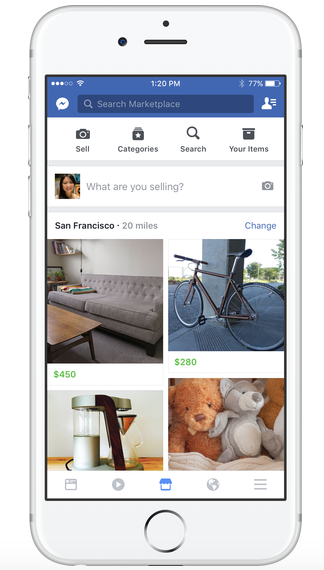 Tech giant Facebook continues to expand its roots, this time venturing into the world of electronic commerce with the launch of “Marketplace.”

The new feature now allows user-to-user exchange for buying and selling goods with others nearby, as per reports of The Verge.

Since over 50 million people already visit “buy and sell” groups on Facebook each month, the tech giant decided to officially create a platform that would cater to this demand.

Marketplace, which debuts this week in the US, the UK, Australia and New Zealand, will cater to users who are looking to haggle for items or even arrange a meet-up.

Unlike anonymous classified ads websites, sellers could eventually be identified better by viewing their Facebook profiles.

The icon for Marketplace should be available in the next few days through its next update, and will replace the Messenger icon in the center of the bottom row on Facebook’s mobile app.

Once tapped, an algorithmically generated home page of items Facebook believes the user will be interested in will instantly appear.

Much like the previous suggested themes feature, the items will be based on the pages users liked—including one’s viewing, buying and selling activities within Marketplace.

To sell an item, interested users would just simply upload a photo, set a name, description, price and a confirmed location.

Despite its potential moneymaking capabilities, the company reportedly has no plans to charge a fee to conduct transactions, which gives it an edge over other competing services.

Marketplace will reportedly roll out in other countries in the near future, if it becomes a hit among users.  Khristian Ibarrola