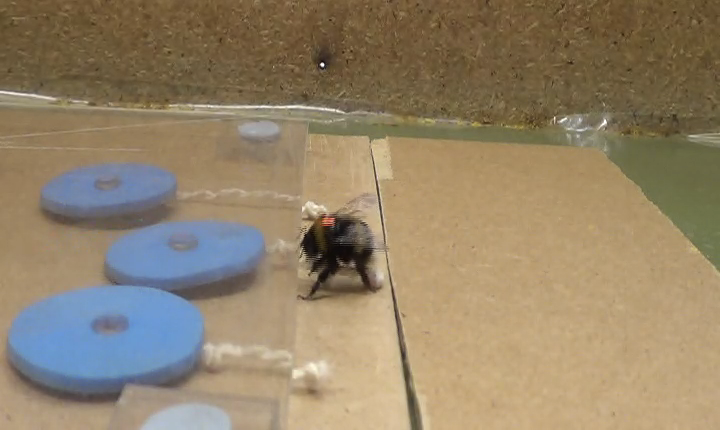 This bee has successfully learned a new skill in acquiring food will eventually influence other members of its group to do the same. Image PLOS biology

Scientists training animals to do all sorts of things is nothing new. Hence we have bomb-sniffing and guide dogs to supplement security and help the handicapped. However, this group of researchers has managed to train bees to pull strings for rewards.

Researchers from Queen Mary University of London has successfully trained 23 out of 40 bees from the original group to access food placed on a disc by pulling on a piece of string, reports The Verge.

Overtime, more bees were introduced one by one into the learned bees’ area to observe and hopefully pick up the behavior. A surprising 60% of the total added bees reproduced the behavior that their brethren had learned without any form of human intervention.

As a final part of their experiment, the scientists reintroduced the “string-bees” back with regular colonies where they are hoping the knowledge that pulling strings will yield food could be propagated. The scientists also tested a separate group of bees consisting of 110 insects with the same problem but without prior human training. Unsurprisingly only two from the group managed to learn the trick.

The study was published in PLOS biology this week. Co-author of the study, Clint Perry said, “Cultural transmission does not require the high cognitive sophistication specific to humans, nor is it a distinctive feature of humans.” You may go to this link for the specifics of the study and some clips of the string-bees in action.  Alfred Bayle