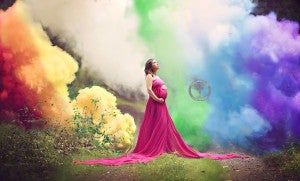 Jessica Mahoney has the sprightliest and coolest maternity shoot any mother has dreamed of. After enduring six miscarriages and fertility struggles, the expectant mother thought of celebrating her rainbow baby with “flying colors.”

Back in August, her husband Kevin sought the expertise of birth photographer JoAnn Marrero to capture the precious moments of his wife, who was pregnant with their second child. Her pregnancy brought bliss and hope, as her second pregnancy was lauded as a miraculous blessing after six miscarriages. Even after the birth of their first child, a son named Corbin, the Connecticut-based couple combated fertility issues, making their journey toward parenthood challenging.

“Bringing this photo to life was definitely a concerted team effort. It was crazy fun! There was dense, vibrant smoke everywhere.  It was quite the explosive surprise and really funny!” JoAnn told Inquirer.net. Her mentor Mary Maloney, prepared the colored smoke bombs for the pictorial.
Akin to Jessica’s own struggles, the maternity shoot itself had its own struggles. Jo Ann recalled that there were lots of coughing, color-stained clothing, and a rainbow residue in their hair.
FEATURED STORIES
TECHNOLOGY
Why MP3 Juice is the Best Free MP3 Downloader Site
TECHNOLOGY
Overfishing hits sardine stock in Bicol, Samar waters – group
TECHNOLOGY
Google AR ‘Measure’ app turns Android phones into virtual measuring tapes
Nevertheless, all their hard work and dedication paid off. “Through our rainbow haze, Jessica stood with composure and her pregnancy glow came shining through like the sun,” JoAnn elucidated. “This was definitely her moment, a proud mother-to-be for the second time.”
Today, the majestic photo is shared on the photographer’s Facebook pages, From Labor to Love and Pebbles and Polka Dots Photography. It was showered with countless praises from social media users and fellow mothers.

“Beautiful things happen when artists come together as a team to create something memorable, in this case for [the] family who is so very deserving. We are incredibly proud and honored to be a part of such special moments,” JoAnn concluded. Gianna Francesca Catolico