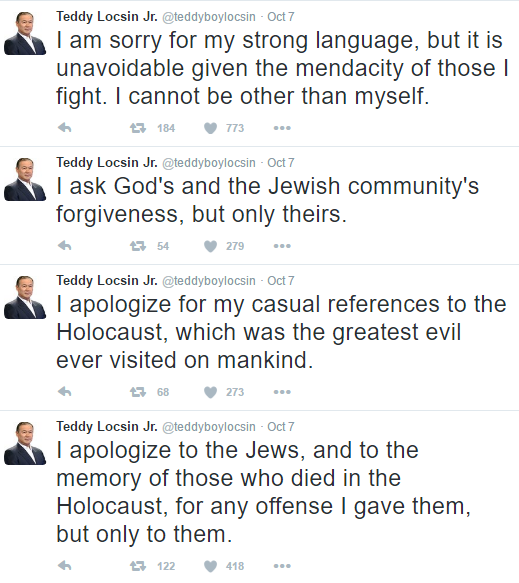 In a series of tweets, Teddyboy Locsin Jr. has apologized to the Jews and God. SCREENGRAB FROM LOCSIN’S TWITTER ACCOUNT

Philippine Ambassador to the United Nations (UN) Teodoro “Teddyboy” Locsin Jr.  has apologized for his “strong language” to the Jews contained in his controversial “Holocaust” tweet.

“I apologize to the Jews, and to the memory of those who died in the Holocaust, for any offense I gave them, but only to them,” Locsin said in a Twitter post on Friday.

“I apologize for my casual references to the Holocaust, which was the greatest evil ever visited on mankind,” he added.

The former broadcast journalist then asked forgiveness from God and to the Jewish community.

“I ask God’s and the Jewish community’s forgiveness, but only theirs. I am sorry for my strong language, but it is unavoidable given the mendacity of those I fight. I cannot be other than myself,” he said.

Locsin had been in a word war with netizens after his tweet that “the drug menace is so big it needs a Final Solution like the Nazis adopted. That I believe. No rehab.”

The tweet, like Duterte’s reaction to comparisons between him and German strongman Adolf Hitler a month later, drew intense criticism.

Known for his biting editorials, Locsin, however, did not back down from his bashers, launching expletive-laced rants against those who criticized him.

In a seeming moment of realization, he also tweeted “Bad words are always wrong.”

An online petition via change.org has been launched, urging the UN to reject Locsin’s nomination.

As of posting time, 10,859 supporters have signed the petition. IDL
READ: Tone it down, netizens tell new ambassador to UN