Can Samsung bounce back after Note 7 fiasco? 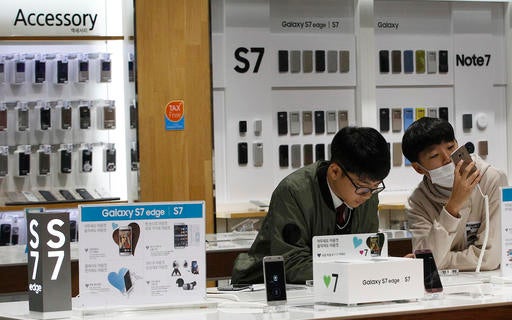 South Korean middle school students try out Samsung Electronics Galaxy 7 edge smartphones at its shop in Seoul, South Korea, Wednesday, Oct. 12, 2016. The fiasco of Samsung’s fire-prone Galaxy Note 7 smartphones – and Samsung’s stumbling response to the problem – has left consumers from Shanghai to New York reconsidering how they feel about the South Korean tech giant and its products. AP Photo

SEOUL, South Korea— The fiasco of Samsung’s fire-prone Galaxy Note 7 smartphones — and Samsung’s stumbling response to the problem — has left consumers from Shanghai to New York reconsidering how they feel about the South Korean tech giant and its products.

Samsung Electronics said Tuesday it would stop making the Note 7 for good, after first recalling some devices and then recalling their replacements, too. Now, like the makers of Tylenol, Ford Pintos and other products that faced crises in the past, it must try to restore its relationship with customers as it repairs the damage to its brand.

Samsung shares plunged as much as 8 percent in Seoul, their biggest one-day drop since the 2008 financial crisis, after the company apologized for halting sales of the Note 7.

“I’m in a state of ‘I don’t know,'” said Pamela Gill, a 51-year-old who works at Pratt Institute, a college in New York City, and likes her replacement Note 7.

“You’re thinking, do I have to turn it in? Is it going to blow up?” she said.

A BRIEF HISTORY OF FIRE

Samsung, South Korea’s biggest company by far, announced a global recall of the devices last month. It said a subtle manufacturing error in the batteries made the phones prone to catch fire, and offered to replace the devices.

Some consumers blame Samsung for not dealing decisively with the issue. Hahm Young-kyu, a 43-year-old South Korean office worker in Seoul whose wife is still using the Galaxy Note 7, exclaims in frustration that the manufacturer tried to “cover up” the Note 7’s failings.

Samsung’s initial recall had a rocky start. After the first reports of overheating devices, it offered replacements, but not refunds. It waited a week before advising consumers to stop using the affected devices. And critics complained that some retailers didn’t have up-to-date information until Samsung made a coordinated announcement with the U.S. Consumer Product Safety Commission.

“Ultimately they did the right thing, which was to announce a full recall,” said Jan Dawson, a tech industry analyst with Jackdaw Research. But when the replacement devices ran into trouble too, he added: “That all goes out the window. Samsung’s claims about fixing the problem are no longer reliable.

As one of the world’s largest tech conglomerates, Samsung can afford to discontinue the Note 7, which was not its biggest-selling phone. While the cost of recalling devices and halting production could exceed $1 billon, it makes far more than that every quarter on sales of components for smartphones and computers.

“A company’s brand is their promise to consumers,” said John Jacobs, an expert on reputation and crisis communications at Georgetown University. “If you break that promise, you lose the customers, you lose their loyalty.”

Initially, the Note 7 got glowing reviews for its size, features and big battery capacity. Now the company is struggling to figure out what exactly is wrong.

“They have to comprehensively check everything from the very basics, outside the battery and inside the phone,” said Park Chul Wan. Park, a former director of the next generation battery research center at the state-owned Korea Electronics Technology Institute.

Park has long argued that Note 7’s problems appeared to be more than a simple battery defect. “This is a truly difficult problem. It was Samsung’s mistake to have underestimated it,” he said.

South Korean safety regulators says they are examining components other than the batteries to try to puzzle out why even the replacement phones Samsung made using different batteries are so fire prone.

“The improved product does not have the same defect. That’s why we think there is a new defect,” said Oh Yu-cheon, a senior official at the Korean Agency for Technology and Standards.

Samsung needs to win back consumers’ trust by the time it launches its next high-end phone, the Galaxy S8, likely in late winter or early spring, Dawson said. “They have that time to come up with a convincing story and a set of actions that will reassure customers that when they buy an S8, it’s going to be safe,” Dawson said.

Kim Young Woo, a tech analyst at SK Securities, believes Samsung could accelerate the launch of the S8 to make up for abandoning the Note 7, but it cannot afford to start from scratch, and it has to find the cause of the overheating.

The Note 7 has cutting-edge features like an electronic stylus and an iris-scanning security feature seemingly suited for a James Bond movie. “Samsung’s best, latest technologies are all in the Note 7,” Park said. “If it releases the next phone, it has to use the technologies in the Note 7.”

The company is the most popular maker of Android phones and the world’s leading smartphone maker, selling over 77 million phones in the second quarter of 2016. But in the prized U.S. market, it lags behind Apple, whose iPhone models are more popular, according to International Data Corp.

CAN SAMSUNG COME BACK?

While the company has suffered a “big setback,” IDC analyst Ryan Reith said, “my guess is it won’t do a lot of damage” to its overall share of the market. But he warned Samsung’s profits may suffer because it will need to offer substantial discounts and other promotions to boost sales of the S7 and other models.

Jacobs, the Georgetown reputation expert, says Samsung will need to do more than that. He said Samsung made the right decision to cancel the Note 7 “for the greater good of the Samsung brand.” But he believes Samsung should emphasize quality and rigorous testing when it promotes future models.

“They want to be known, two years from now, as a company that can be trusted,” he said. When potential customers contemplate future Samsung products, he said, “you don’t want them having that worry in the back of their mind.”