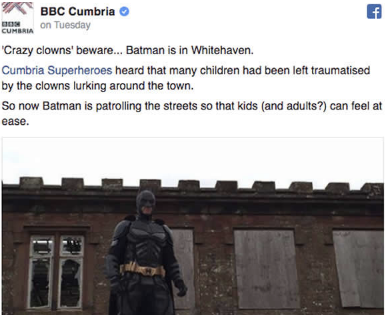 The killer crown mania has indeed taken over some parts of the world and one famed caped vigilante has taken it into his own hands to stop these pranksters in their tracks.

In one of the most strangest trends yet, people—mostly composed of bored teenagers—have been dressing up as creepy clowns and roaming the streets at night to scare onlookers.

According to reports from BBC, children from a small town in Cumbria in northwest England have been shaken up by a group of clowns lurking around town. Parents have also become greatly stressed. Some clown-related incidents even left children traumatized and unable to sleep, according to the reports.

The epidemic has gone so bad that local costume company Cumbria Superheroes has sent out a man in a Batman costume to chase down the troublemakers.

Several sightings of the “caped crusader” has been shared on Facebook, while a couple of grateful netizens have expressed their appreciation to the man behind the mask.

One message read:  “I have been scared of this clown situation (school told us about it yesterday). I seen on my mom’s Facebook that you caught the clown. This means I can go to school and not be scared, thank you for your efforts.” 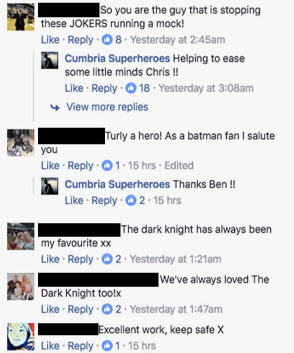 One picture also appeared online of Batman appearing to chase one of the clowns, but it remains unclear if it was staged or not. 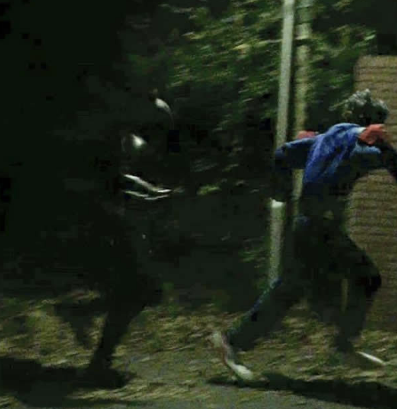 Ironically, The DC icon has a proven track record for clashing with pesky clowns, evident by his never-ending saga with the his arch-nemesis, the megalomaniac Joker.  Khristian Ibarrola