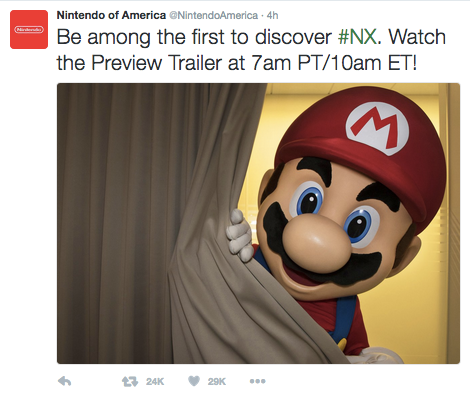 Official news about the NX is finally going to be revealed on Oct. 20 at 10 p.m., local time.  Image @NintendoAmerica

Just a few hours ago, Nintendo of America posted a photo of Mario half-hidden behind a curtain attached with a message that teases the company’s upcoming gaming console, the Nintendo NX.

The tweet was brief and read, “Be among the first to discover #NX. Watch the Preview Trailer at 7am PT/10am ET!”

The trailer for the NX will be played at 10 p.m. today, local time, and Nintendo says that the 3-minute trailer will be the “first glimpse” for the “preliminary announcement of information regarding the platform,” reports The Verge.

Current information sets the NX release date for March, however. No other details were released regarding the console’s build and technology. Some rumors pegged it as a hybrid handheld system that has a way of connecting to TV sets.  Alfred Bayle