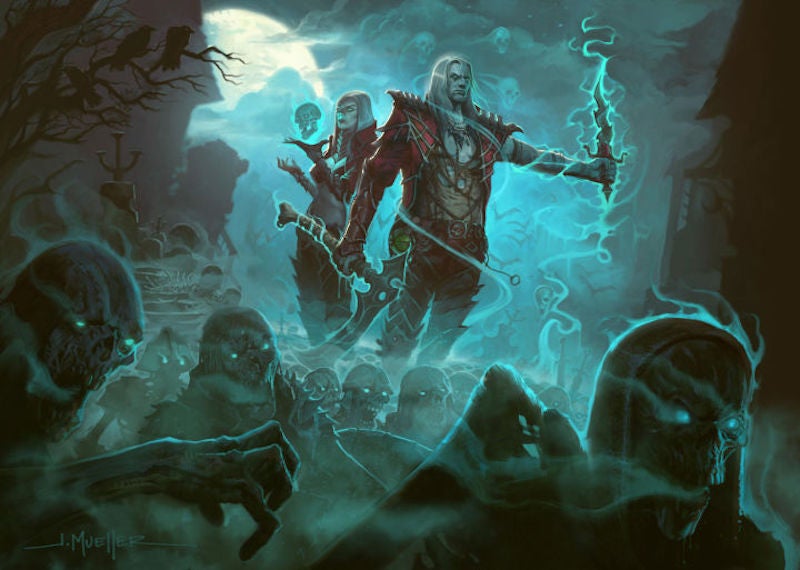 The Necromancer orginally debuted in Diablo 2 but will once again be wreaking havoc with a skeleton army in Diablo 3. Image Blizzard

Since 2014’s release of Diablo 3 expansion, Reaper of Souls, not much has been heard of from Blizzard Entertainment with regards to one of its most beloved franchises. Until BlizzCon 2016, that is.

Perfectly timed to celebrate the Diablo franchise’s 20th anniversary is the announcement of new content and a new playable character, reports Mirror Online.

Said character is actually a returning one from Diablo 2- the Necromancer. During the event, Blizzard also offered attendees a chance to try out the new character.

The demo is locked to a specific list of skills, namely Siphon Blood, Bone Spear, Decrepify, the ever handy Corpse Explosion and, of course, the Command Skeletons. There was one other skill that was locked but featured during a panel discussion with the game programmers and artists. Army of the Dead is a skill that essentially raises a 100-strong skeletal army that rushes and pummels a single enemy.

Blizzard will also be implementing a few changes on the game mechanics. “Armory” will be added to allow players to save up to five different armor and ability loadouts. This should make it easier for players who like to specialize their equipment and skills depending on the situation. They just need to warp back to the hub, push a button and get back into the fight.

Gems socketed into items will be carried over and the game will even help out by bulling the highest tiered gems available. Best of all, the cost for unsocketing gems via Shen has been removed.

Finally, the original Diablo story will be made available for play. All of these new goodies, except for the Necromancer, will be accessible via the Public Test Realm (PTR) for the Diablo 3 PC version starting next week. The rest of the gaming world will have access starting January 2017 through a month-long event called “The Darkening of Tristram.” Blizzard says they want to make this available every January.

As for the Necromancer, the character has been scheduled for the second half of 2017. It should give dormant players enough time to get back into the game and level their mothballed characters.  Alfred Bayle