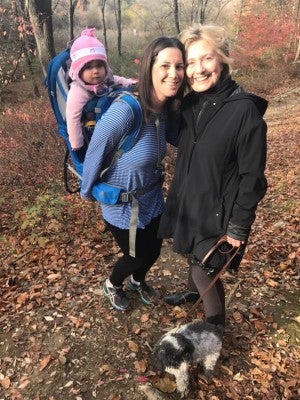 A mountain hiker ran into Hillary Clinton on the Chappaqua trail in New York, one day after the highly contested US elections.

Margot Gerster was hiking with her little daughters after she felt “heartbroken” upon sighting the poll results declaring Donald Trump as the victor . Suprisingly, she bumped into the female presidential candidate she had voted. She shared her heartwarming encounter on Facebook Friday.

“As we were leaving, I heard a bit of rustling coming towards me and as I stepped into the clearing there she was, Hillary Clinton and Bill with their dogs doing exactly the same thing as I was,” Gerster wrote.

“I got to hug her and talk to her and tell her that one of my [most] proudest moments as a mother was taking Phoebe (her daughter) with me to vote for her. She hugged me and thanked me and we exchanged some sweet pleasantries and then I let them continue their walk,” she narrated.

One user shared her aching thoughts about Clinton’s mournful crumble to President-elect Trump. “I couldn’t sleep and [I] was heartbroken too. However, after listening to Hillary’s concession speech I felt so proud of her, such a classy and graceful lady,” the user commented.

Another one said, “Heartening. I wish I could have given her a hug too.”

The Clinton family owns a home in Chappaqua, which is several miles near the city proper. On Thursday, she surrendered her longtime bid for the White House and tearfully conceded to Trump.  Gianna Francesca Catolico

2020 Filipinos of the Year: Health-care front-liners

Essential workers: The many faces of pandemic heroism