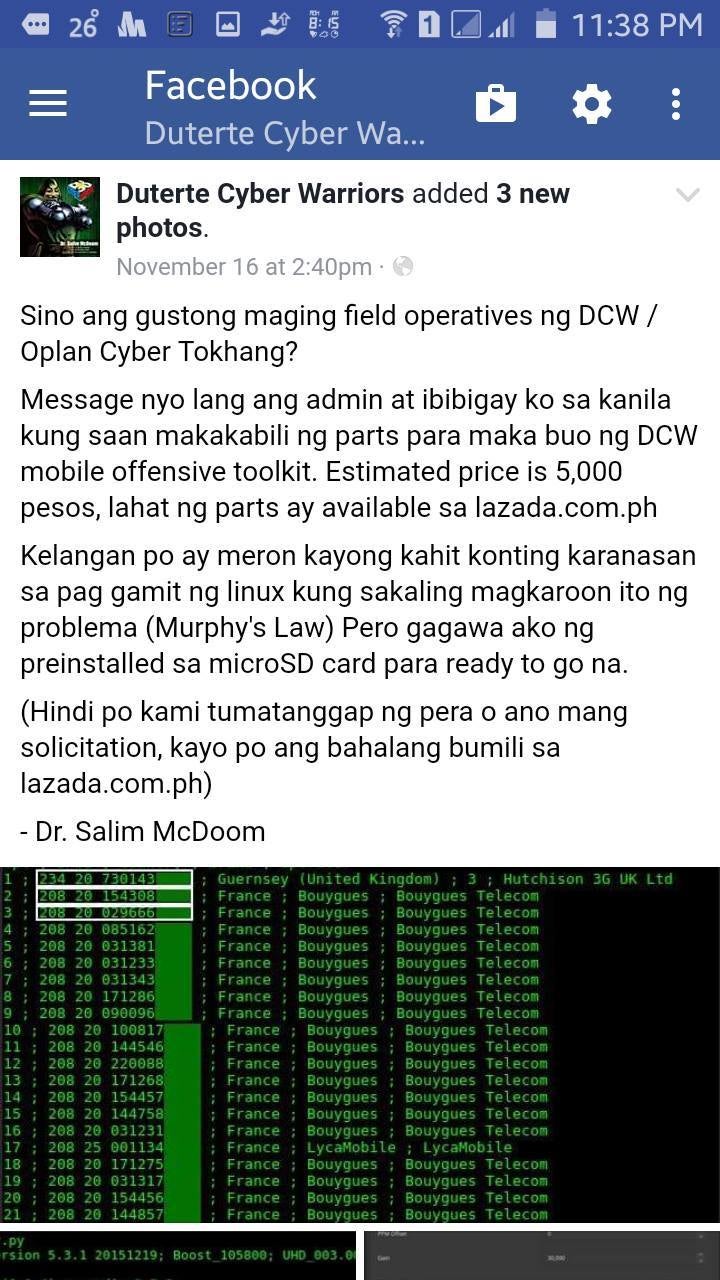 Screengrabs of posts from the group “Duterte Cyber Warriors” have been circulating on social media. Some of the posts discuss how to hack phones and Facebook accounts.

The posts have since been deleted.

One post called on people to join them in their “radical aim” to stop people who want to take advantage of the youth. The group claimed that Catholic Schools are using “demonic” ways to mislead students.

They claim that anyone can build a “DCW mobile offensive tool” and monitor WiFi and cellphone traffic by buying materials available in online stores.

(You don’t need to do anything other than bring the device near the target and we will be the ones to get the information and monitor them 24/7.)

READ: The infrastructure of the Philippine troll army

The group asked for “field operatives” for their “Oplan Cyber Tokhang.” 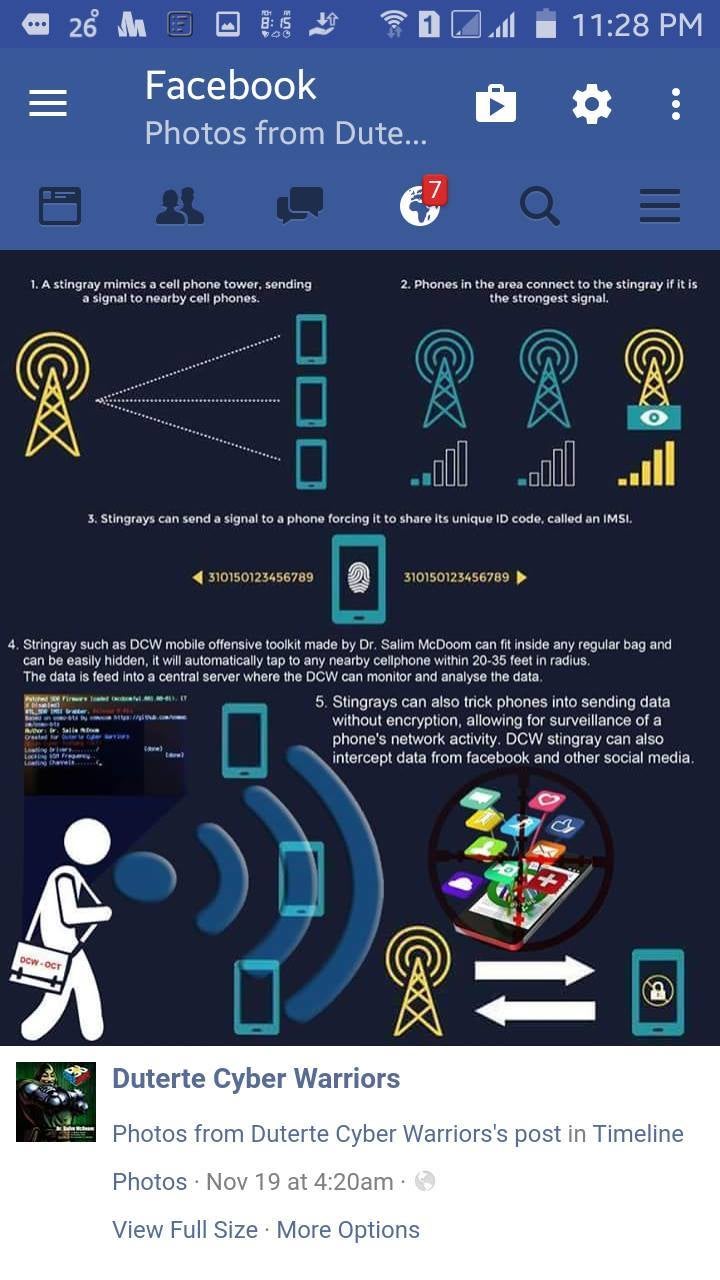 INQUIRER.net has received reports that some students and professionals who participated in rallies protesting the burial of former president Ferdinand Marcos have experienced trouble with their Facebook accounts.

“Someone is trying to hack my account and accounts of other Anti-Marcos peeps too,” one user posted.

Rick Bahague of the Computer Professionals’ Union told INQUIRER.net that knowledgeable people can easily buy the gadgets posted by the group although such products are supposed to be regulated by the National Telecommunications Commission (NTC).

“Based on the post that I saw, it acts as a fake cell tower. So, if the mobile phone is within range of the fake tower, the mobile phone will connect to that. Once they are connected, they’ll gather data/SMS/call traffic and decrypt whatever relevant info they can use to do identity theft or other malicious actions,” he said.

“We urge government agencies to look into this serious matter and punish groups and individuals encouraging and doing such acts,” his group said in a statement. 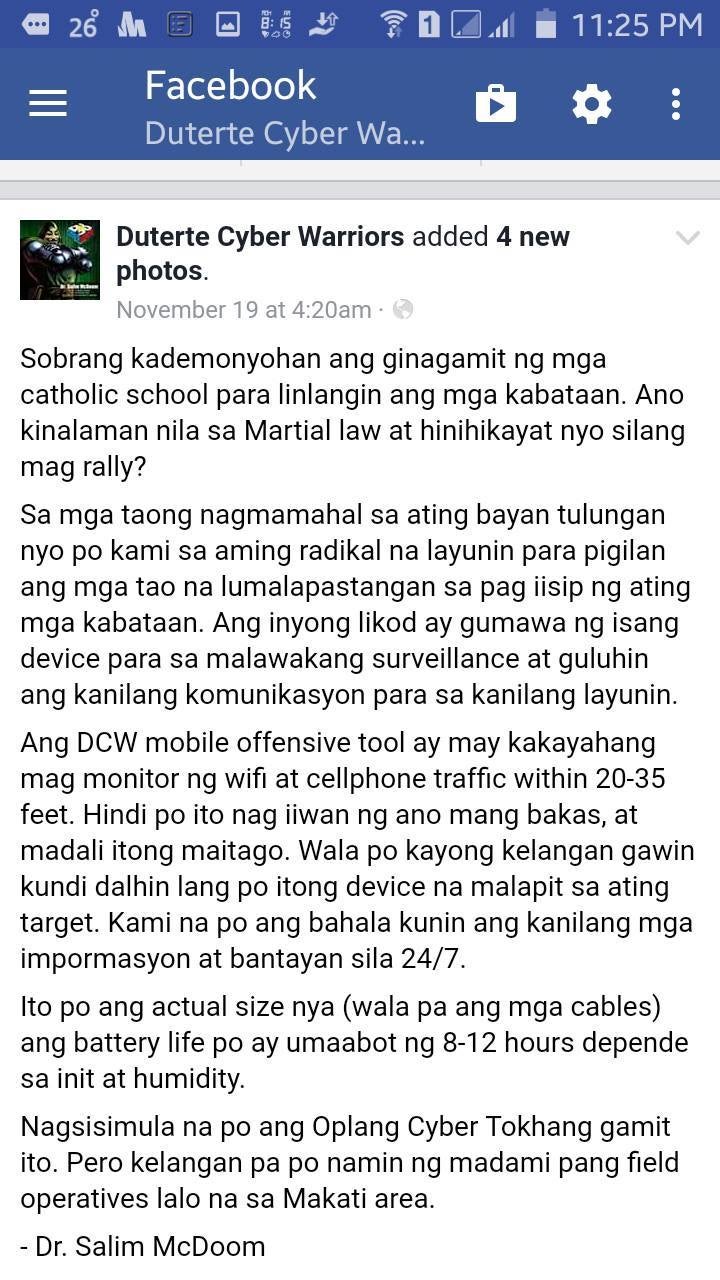 While the posts about hacking have been deleted, the Facebook group Duterte Cyber Warriors still feature calls to shut down pages supporting the anti-Marcos protests.

(Many anti-Marcos campaigns are surfacing but their real purpose is to push for people power to destabilize the government and eventually overgrow our President.) 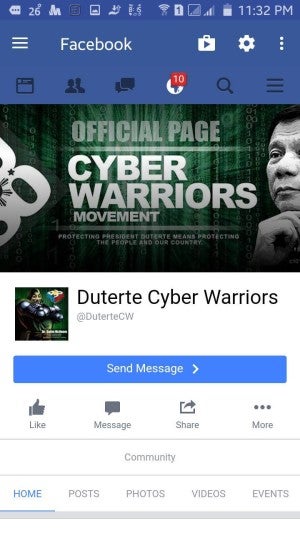 Protest leaders are more wary at believing such posts.

“Can they really do that? That would be a new low,” Bagong Alyansang Makabayan secretary general Renato Reyes said.

However, he said they have been observing another kind of cyber operation since Wednesday.

The Facebook page of the Campaign Against the Return of the Marcoses to Malacañang (Carmma), for example, has been swamped with negative comments, reminiscent of Twitter bots or trolls.
“The comments were coordinated and said the same thing over and over,” he said. “Disinformation overdrive is what’s happening.”

“It is a desperate attempt to derail the protests,” he said. “SMS are also being sent out to people, discouraging them from going.”

Meanwhile, Vencer Crisostomo of Anakbayan called such posts “cheap and desperate attempts to scare, distract the participants and dissuade them from joining the protests.”

“The Duterte government and authorities should not resort to such Marcosian scare tactics. Duterte, government ‘cyber warriors’ should use technology for the benefit of the people and not as fascists tools for repression,” he said.

In the meantime, people have been sharing safety precautions to prevent hacking.

The Computer Professionals’ Union reminded the public to use a strong password for their social media accounts.

Other users who experienced being locked out of their own accounts said people should change their passwords.