To fast track the recruitment process, luxury resort and casino Okada Manila has brought Selen to the Philippines as an applicant interviewer.

Selen is a robot that screens applicants during the initial interview. From a checklist of requirements, the human resource department will determine who will move to the next step.

Okada Manila is a four-hectare hotel resort and casino, which is looking at employing 5,000 people when it opens this year. At its career fair held recently, Okada was able to attract 2,000 applicants in just a few days.

With the hotel and casino set to open in December, the task of filling in that number of positions may take a while.

Terry Llamas, vice president of Okada Manila’s human resources department, said they encouraged applicants to apply online before they go to the first interview, which would be done by Selen any time of the day. 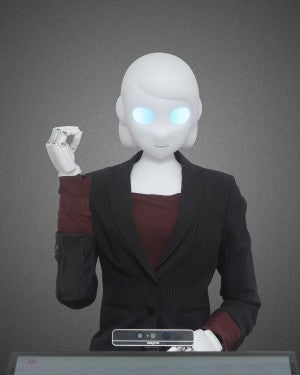 Selen is a robot that screens applicants at Okada Manila.

“It is impossible for us to have a full grasp of the candidates’ ability and qualification with that huge number of applicants,” Llamas explained.

“The vision of the chair, Kazuo Okada, is to give equal opportunities to all Filipinos,” Llamas said. “So, we are making the initial application process open 24 hours, seven days a week. It means that Selen can ‘interview’ people, who may only be passing by, any time of the day, even at midnight.”

“We are able to sort out who we believe would be the best candidates to move forward for interview,” said Llamas. “We want to believe that using Selen would provide us with a more objective feedback of applicants.”

Okada is looking to fill in vacancies in hospitality, housekeeping, transportation, security, surveillance “and of course for casino or the electronic gaming team members.”

Llamas said the objective was to eventually use Selen and maybe bring more robots like her in the future, not just for application screening but also for training.

Okada Manila started the construction in 2012. Phase 1 is the hotel, which will have about 1,000 rooms. The casino will have 500 table games and will be spread out throughout the whole property.

According to Llamas, Okada is very much impressed with the Philippines and its rise to become one of the emerging economies during the previous administration that it led him to choose the country as the venue for his next venture.

Okada rose through the ranks and founded Universal Lease Co. in 1969. At present, he chairs his billion-dollar earning venture, Universal Entertainment.

Okada formed a local company, Tiger Resort, Leisure and Entertainment Inc., to handle the development of the Manila property. In July 2016, the said property was unveiled as the Okada Manila, a $2.4-billion integrated hotel, resort and casino that represents Okada’s biggest investment to date.