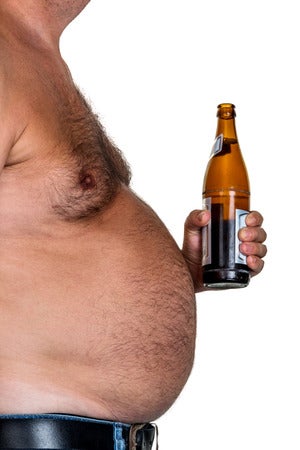 Obesity has been heralded as a leading cause of death, but a recent study says that slim adults with excess fat around their stomach are at a much higher risk.

Scientists have found that individuals who are centrally obese, or possess “beer bellies,” are twice more likely to be at risk of death than those who are heavier but have more fat distribution in their bodies, The Telegraph reports.

The study, which was published in Annals of Internal Medicine, took data from 15,184 adults aged 18 to 90 who were deemed to have equal body fat distribution, based on anthropometric indicators.

As it turns out, the obese group scored a much lower mortality rate than those who suffer central obesity, who were linked to an increased total of cardiovascular deaths.

“Obesity defined by BMI (body mass index) or measures of central obesity, such as waist-to-hip ratio (WHR) and waist circumference, is associated with increased total and cardiovascular mortality,” Dr. Francisco Lopez-Jimenez, a cardiologist at the Mayo Clinic, Minnesota, described the findings of their research in the report.

Doctors also claim that those with extra stomach fat have less muscle mass, which is an indicator of metabolic dysregulation and which is often associated with a higher death rate.

Researchers admitted, though, that this is the first time that BMI is used as a precursor of assessing death risks, and it still varies for people who were born with genetics of obesity.

“Our findings suggest that persons with normal-weight central obesity may represent an important target population for lifestyle modification and other preventive strategies,” Lopez-Jimenez said.

“Further measures of fat distribution provide any incremental risk information beyond BMI alone has been a major source of controversy,” he added.

Until an alternative procedure is discovered to confirm their findings, researchers will continue the use of BMI with measures of central obesity to determine health risks.