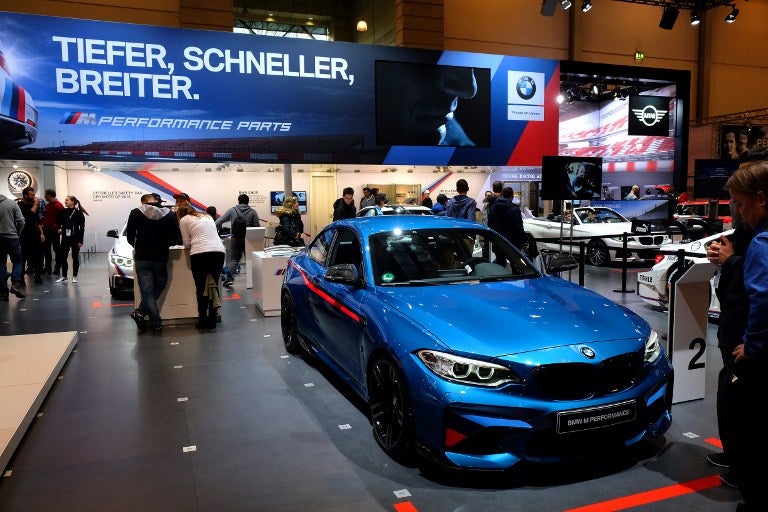 This file photo taken on November 30, 2016, shows visitors looking at cars on the stand of German manufacturer “BMW” during the ‘Motorshow’ fair in the western German city of Essen. Carmakers sold more vehicles in Germany in 2016 than in any year since 2009, figures released by the German Association of the Automotive Industry (VDA) showed on January 4, 2016. AFP

FRANKFURT AM MAIN, Germany — BMW customers will be able to view the luxury carmaker’s hybrid and electric BMWi cars with augmented reality technology in a world first for car dealerships from Thursday, the manufacturer said.

Using a smartphone, potential buyers can view and interact with a virtual car as if it were standing in front of them.

“In situations where the desired product isn’t available on the spot, this visualization is the next best thing,” said BMW executive Andrea Castronovo.

The phones equipped with US giant Google’s Tango technology produce a life-size 3D image of the vehicle overlaid on the environment visible through the camera.

Users can open doors, activate lights, or change the interior and exterior color scheme at the touch of a button.

The pilot project will launch in selected dealerships across 11 of the biggest markets for the BMWi range, including Britain, China, Germany, Italy, Japan, and the US.

Once the test phase is over, BMW plans to make the application available via Google’s Play app store — letting smartphone users conjure up a car wherever they are.