For ‘intelligent’ robot, chess is just a hobby 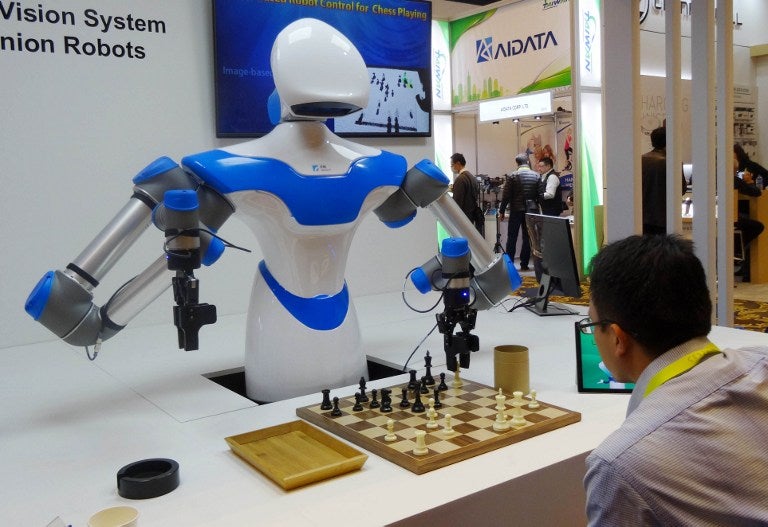 A robot developed by Taiwan engineers moves chess pieces on a board against an opponent, ,at the 2017 Consumer Electronic Show (CES) in Las Vegas, Nevada on January 8, 2017. The robot developed by Taiwan’s Industrial Technology Research Institute, which spent the week playing games against opponents at the Consumer Electronics Show, was displaying what developers call an “intelligent vision system” which can see its environment and act with greater precision than its peers. AFP

Las Vegas, United States — A robot developed by engineers in Taiwan can pour coffee and move chess pieces on a board against an opponent, but he’s looking for a real job.

The robot developed by Taiwan’s Industrial Technology Research Institute, which spent the week playing games against opponents at the Consumer Electronics Show, was displaying what developers call an “intelligent vision system” which can see its environment and act with greater precision than its peers.

With this enhanced vision, the robot can perform variety of tasks for service and manufacturing, and can also learn on the job with artificial intelligence.

Playing chess is just a hobby showcasing the robot’s visual acuity — such as the ability to distinguish between different chessmen — and dexterity in gripping and moving objects.

The vision system can recognize objects and their location with greater precision than other robots, said ITRI division director Lewis Liu.

This robot “has more flexibility” to locate and manipulate an object, with a robotic version of “hand-eye coordination,” Liu said.

A robot using this technology could, for example, perform household tasks such as setting and clearing a table, or assisting seniors or disabled people with meal preparation.

In an industrial setting, it would have greater flexibility than other robots in adapting to new situations. Instead of being programmed for a single task in a defined space, it could recognize when a component is a different size or a different location.

The robot at CES showed that ability by pouring coffee for its chess opponents, regardless of where they placed their cup.

The ITRI robot is among several being shown at the Las Vegas technology show with enhanced artificial intelligence that enables new skills.

The institute is not commercializing the robot, but he is available for work in a service or industrial job through an investor or partner, according to Liu. CBB