Scientists: Moon over the hill at 4.51 billion years old 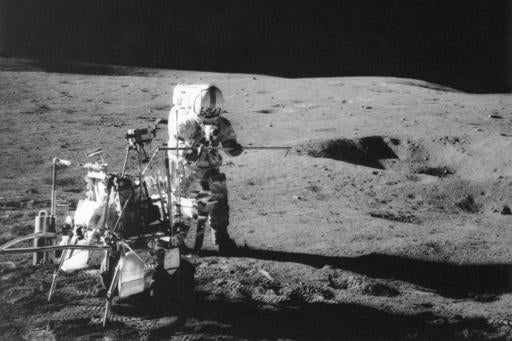 In this Feb. 13, 1971 file photo, Apollo 14 astronaut Alan B. Shepard Jr. conducts an experiment near a lunar crater, using an instrument from a two-wheeled cart carrying various tools. AP

CAPE CANAVERAL, Fla. — It turns out the moon is older than many scientists suspected: a ripe 4.51 billion years old.

That’s the newest estimate, thanks to rocks and soil collected by the Apollo 14 moonwalkers in 1971.

The scientists conducted uranium-lead dating on fragments of the mineral zircon extracted from Apollo 14 lunar samples. The pieces of zircon were minuscule — no bigger than a grain of sand.

Lead author Melanie Barboni of UCLA says knowing the age of the moon is key to understanding the formation and evolution of Earth. TVJ