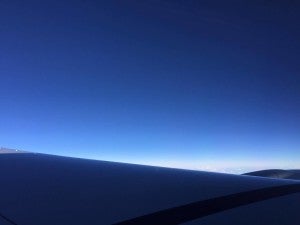 When it comes to space, not even the sky can be a limit, as the Philippines finally takes its first steps to establish a Philippine Space Agency. Image: John Patrick I. Allanegui

The question is what do we do with outer space.

A year ago, I joined a small team under the Department of Science and Technology (DOST) dedicated to space development in the Philippines. A few months into the job, I found myself seated on a beige sofa inside one of the rooms of the Senate office in Pasay City, waiting for our appointment with a senator.

“Make sure you have the materials ready,” my boss who sat next to me reminded me.

I flipped through the documents in my hands, making sure everything was in the same order as I had printed them. Turning the pages, I thought that no pile of papers would ever prepare us for the mission: to convince lawmakers in less than 30 minutes that the Philippines needs a space policy and a space agency to sustain it.

“The senator is ready to see you now,” a woman dressed in blue said to us, motioning us towards an ivory door.

Recalling that day now, I find it surprising that persuading lawmakers to support the creation of the Philippines’ space policy and space agency isn’t as hard as I thought it would be. The tougher battle, I realized, will be fought with the Filipino public. 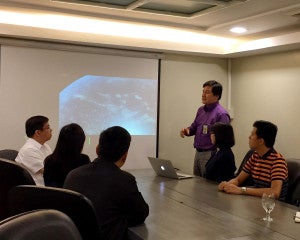 Dr. Rogel Mari Sese presenting the importance of having a space program and agency to officials of the Board of Investments of the Department of Trade and Industry. Image: National Space Development Program via Facebook

Why then does the Philippines need to look up and venture into space to deal with things on earth?

That question was just one of the things we had to deal with at the National Space Development Program (NSDP), which was created by the Philippine Council for Industry, Energy and Emerging Technology Research and Development of the DOST (PCIEERD-DOST) back in September 2015.

Led by Dr. Rogel Mari Sese, the NSDP was created as a 12-month interim program to establish the necessary groundwork and foundation prior to the creation of the Philippine Space Agency.

Contrary to popular belief, our job did not involve training Filipino astronauts, planning the next mission to Mars, or finding extraterrestrial life, and those other stuff sci-fi movies are made of.

Rather, we went back to the basics.

We crafted national roadmaps on space research and development, satellite development, satellite data sharing, and space industry development that the country will use in the next 10 years. To do this, we engaged with stakeholders from the government, academe, private, and defense sectors, finding points of collaboration in various space-related capacities.

On days when we were not busy manning our desks, we were out consulting lawmakers and stakeholders to align their respective fields with appropriate space-based tools and needs. 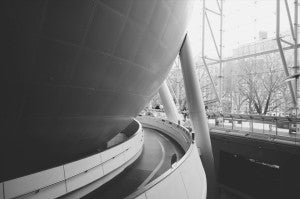 Planetariums provide a good venue for the public to know how space affects our daily lives on Earth. Taken at the Rose Center for Earth and Space, New York City. Image: John Patrick I. Allanegui

Last September and October 2016, House Bill 3637 and Senate Bill 1211 were filed by lawmakers. Both bills aim to legislate a Philippine Space Development and Utilization Policy and create the Philippine Space Agency.

Their tenets were simple: the space policy and agency would govern and maximize all space-related activities in the country for economic development.

Just a few days ago, I woke up to the news that the government is creating a National Space Development Office (second phase of the NSDP), which is the precursor to the larger Philippine Space Agency as we wait for its approval in Congress.

There were people naturally up in arms over the announcement, saying that the government must be “high” to even consider the ambition of space.

The public demands: why would we consider space when we have millions of mouths to feed and gridlocked roadways in Metro Manila to deal with? 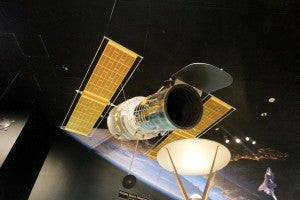 Satellites are a concrete example of the usefulness of space technology. Taken at the National Air and Space Museum, Washington DC. Image: John Patrick I. Allanegui

The uses of space

Such reactions reveal the public’s limited notion of space, the kind that boxes it into what NASA is best known for: sending people into and out of orbit.

What a lot of us Filipinos do not realize, however, is that space is an all-encompassing field that goes back to fundamental things, to the most crucial aspects of our lives.

The many uses of space go back to agriculture, disaster management, environmental management, national security, and economic development, among others.

Space breeds technologies that are helpful across sectors. It holds the key to enhanced weather-based systems that help us monitor and assess the next calamity, helping us make better predictions and save lives. It involves tracking capabilities that may help in solving our traffic crisis. It also provides technologies such as drought monitoring and natural hazards protection to our farmers and fisherfolk alike.

Space-based tools are also helpful to impoverished populations in rural areas that do not have access to basic services such as medical care and education.

Tele-medicine, which uses satellite links to provide medical diagnosis by doctors to patients in remote areas, fosters connectivity wherever immediate medical help is not available.

Another example is tele-education, in which satellite-based distance education services are used to bridge the rural-urban divide ,to supplement existing curriculum-based teaching and provide quality instruction to students in remote areas.

Simply put, space goes beyond its clichéd form. It fills so many gaps that other technologies cannot. 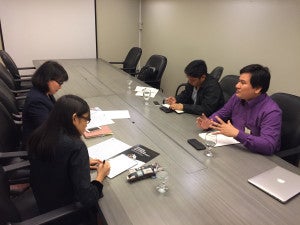 The NSDP team explaining the importance of having a space program and agency to officials of BOI and DTI. Image: John Patrick I. Allanegui

The cost of space

Currently, the functions of a space agency are spread throughout different government agencies.

The lack of one agency to unify space-based functions can be costly. For example, there have been instances when different government agencies would purchase satellite images of the same area. This duplication in purchases stems from the lack of coordination among agencies, leading to unnecessary expenses that do not come cheap.

According to a baseline research done by the Manila Observatory, the Philippine government spends at least P3.5 billion a year just to acquire such images and make use of other space-based capabilities from foreign providers. However, estimations on developing our own space program and agency are pegged only at P2.5 billion a year.

“For every peso you invest in space, you get a return of about P2.50,” Dr. Sese would emphasize in his presentations with lawmakers and stakeholders, lightening up all their faces in the room.

It is through this disclosure that he would make their heads nod in awe, as they are led to finally realize the fact that space is a lucrative endeavor for economic development in the long run.

Towards the end, Dr. Sese would always make one thing clear: it’s costly to have a space program and agency, but it’s even costlier for everyone to not have both. 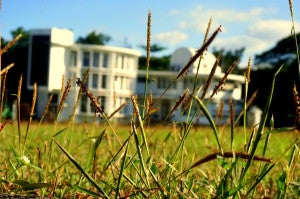 Whenever I look at the recent developments in space in the country, I’m always shuttled back to that day in Pasay City – the day that I, my boss Dr. Sese, and the rest of our team had to lobby to a senator for the first time. At that time, it was Sen. Panfilo Lacson who was the first to heed our request for a sit-down to explain our mission, along with Sen. Bam Aquino. Needless to say, that meeting went well, as did the numerous meetings with other lawmakers after that. We hope that this openness by the lawmakers and the administration, to something as visionary and pivotal as this, continues.

As Dr. Sese and I exited the Senate building that day, we were greeted by an overcast sky, the sign of a forthcoming rainsquall. I thought of the question that we came with at the beginning of our mission.

What then do we do with outer space?

In a world where we seek space technology to divide rural-urban gaps, where we rely on spatial data to safeguard our territories, and where we cannot simply pass a law to prohibit typhoons from entering the country, perhaps we’ve been asking the wrong question.

No, the question is not ‘what do we do with outer space.’ Rather, it’s ‘what would we do without it.’