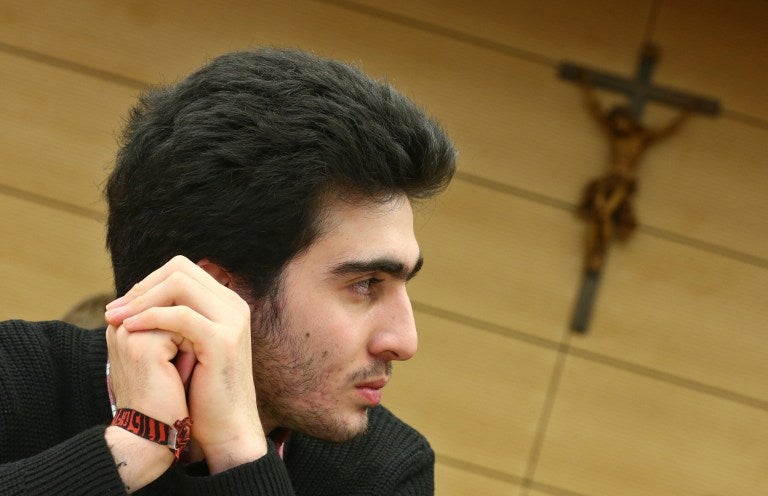 Syrian refugee Anas Modamani sits at the district court in Wuerzburg, Germany, on Feb. 6, 2017. Modamani accuses the social network Facebook of helping spread defamatory fake news over a 2015 selfie that he took with Chancellor Angela Merkel. The photo was manipulated to falsely link him to violent jihadists. AFP

WUERZBURG, Germany — A Syrian refugee whose selfie with German Chancellor Angela Merkel has been repeatedly manipulated to link him to violent jihad, took Facebook to court on Monday for spreading defamatory fake news.

Anas Modamani, 19, says the US social media giant has failed to take down doctored images and posts that have falsely linked him to, among other things, deadly Islamist attacks in Brussels and Berlin last year.

He is asking a court in Germany’s southern city of Wuerzburg for an injunction against Facebook Ireland Limited, the group’s European subsidiary, that would force it to take down all posts linking him to terrorism or criminal offences.

That includes a recent posting which wrongfully claims Modamani was among a group of Berlin juvenile delinquents who tried to set fire to a homeless man in a case that sparked public outrage last Christmas.

Modamani is being represented by German lawyer Chan-jo Jun, who has already launched separate criminal complaints against Facebook for inciting hatred.

Jun argues that Facebook should comply with German law and remove illegal content, claiming that the company’s own community standards did not prevent defamatory and insulting statements.

“We want to put an end to the incitement and slander,” Jun told reporters after the first hearing on Monday.

Modamani arrived in Germany in 2015, along with tens of thousands of other Syrians.

When Merkel visited his Berlin refugee shelter in September that year, he took two selfie images with her in jubilant scenes also captured by a news agency photographer.

Since then, those images have been manipulated and used in different contexts countless times, as right-wing fury has flared online against Merkel’s liberal stance on refugees.

Trolls have cut and pasted Modamani’s picture into wanted posters and on fake news reports, typically alleging that the refugee made famous by the Merkel selfie had turned out to be a terrorist.

Modamani, who is now taking German language courses and working in a fast food restaurant, said the hateful posts had had a big impact on his life.

Ahead of the proceedings, a Facebook spokesman told AFP: “We are sorry to hear about Mr. Modamani’s concerns with the way some people have used his image.

“We are committed to meeting our obligations under German law in relation to content which is shared by people on our platform.

“We have already quickly disabled access to content that has been accurately reported to us by Mr. Modamani’s legal representatives, so we do not believe that legal action here is necessary or that it is the most effective way to resolve the situation.”

Jun however argues that some of the nefarious content remains online and that the burden should be on Facebook, not his client, to identify any misuse of the image.

The court is expected to deliver its ruling on March 7.

Facebook has faced heavy criticism in Germany for fake news and hate speech spread by its users, leading the company to promise corrective steps on both fronts.

The company and other web giants pledged in December 2015 to examine and remove within 24 hours any hateful comments that were spreading online in Germany, in particular over the mass influx of 890,000 migrants that year.

Jun last year launched legal action against Facebook in Munich, accusing its executives of condoning incitement of hate and violence, and of failing to remove illegal content despite being notified.

Justice Minister Heiko Maas, who has been negotiating with social network chiefs, has also warned that Facebook and others could be punished if they do not comply with German law.

Last October, a senior leader of Merkel’s center-right party, Volker Kauder, warned social networks that Germany could introduce fines for illegal content that is not removed within a week, with a suggested penalty of 50,000 euros ($55,000) per post.

Facebook announced in mid-January that it would introduce new measures to take down “unambiguously wrong reports” being shared on the social media platform.

The company said it would offer a simpler reporting process for users to flag suspected fake news, display warnings next to statements identified as false by independent fact-checking organizations, and cut off advertising revenue to fake news sites. CBB