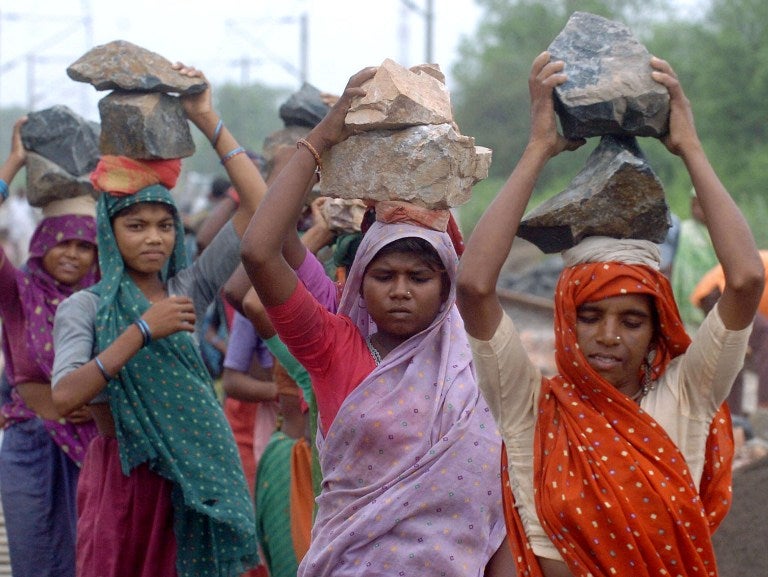 Indian workers carry rocks to repair railroad tracks in Godhaj, in the western state of Gujarat. A study showed that women who work nights and carry heavy loads may have fewer and inferior eggs than regular daytime workers. AFP FILE

PARIS, France — Women who work nights and do heavy lifting on the job may have fewer and inferior eggs than nine-to-fivers, said a study Wednesday into a potential cause of infertility.

Previous research had shown a link between work conditions and fertility, but this was the first attempt to examine how shift work or manual labor might affect a woman’s physical capacity to have a baby, the authors said.

The US-based team analyzed data from about 400 women attending a Massachusetts fertility clinic. Their average age was 35.

The researchers assessed “ovarian reserve” — the number of remaining eggs a woman had — as well as levels of a hormone which rise as fertility dwindles.

They also examined how many eggs were “mature” and capable of developing into a healthy embryo.

This data was compared to the women’s job conditions — how much physical exertion was required of them, and the hours that they worked.

About 40 percent of women said they had to regularly move or lift heavy objects, while a fifth said their jobs were moderately to very physically demanding.

“Women with physically demanding jobs had a lower reserve of eggs than those whose work did not regularly require heavy lifting,” said a press statement from the journal Occupational & Environmental Medicine, which published the study.

The effect was strongest in overweight women and those older than 37, the researchers said.

Women are believed to be born with a finite number of eggs, which steadily die off over time — a process which can be accelerated by factors such as smoking, for example.

The team merely observed a correlation between work conditions and egg health, and cannot say with certainty that one causes the other.

They also cannot be sure that a similar correlation would be found in women not in need of fertility treatment.

Other experts not involved in the research pointed out other potential flaws.

With fewer than 500 women, the study was too small to rule out other possible causes for reduced egg quantity or quality.

“For example, it is possible that they (shift workers and heavy-lifters) were poorer and therefore had different social conditions or diet compared with the nine-to-five workers,” said Channa Jayasena of Imperial College London. CBB