All records are bound to be broken at some point.  With sheer determination and complete disregard for finger numbness, one Japanese lad has set the standard for the most finger snaps in one minute.

In front of a live audience of Japanese TV show “Tantei! Knightscoop”, college student Satoyuki Fujimura entered the annals of the Guinness Book of World Records by accomplishing the seemingly unnecessary feat, for a complete 60 seconds.

With the previous world record of 278 snaps by Sweden’s Jens Gudmandsen, the determined man had to push his body to the limit in order to give himself a chance on beating the record.

After painfully gyrating his body with each snap, Satoyuki managed to amass an astonishing 296 finger snaps in one minute.

Guinness’ official adjudicator Kaoru Ishikawa was in attendance during the record-breaking, and replayed the performance in slow motion alongside two professional sound engineers.

Only audible clicks made using the thumb and middle finger were included in the final total, the Guinness website confirmed.

Prior to Satoyuki’s efforts, the record has remained unchallenged for the past eight years.

The viral video, as of this writing, has been viewed nearly half-a-million times on YouTube and has been shared by over 6,000 Facebook users.

Satoyuki’s seemingly frenzied facial reaction also became the toast of internet commenters, with one user joking: “I bet his wife gets things done reeeeeal quick around the house.”

While another one chimed in: “Is it me or does it look like he’s doing something else [the] way [he’s] bouncing up and down, semi-squatting with those facial reactions. Go hard or go home boy.” JB 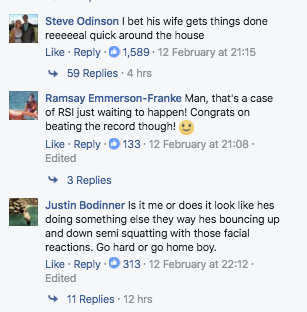