NEW YORK (AP) — Google Inc. unveiled its long-planned music service Tuesday, but it will likely need deals with the recording industry to reach its full potential. 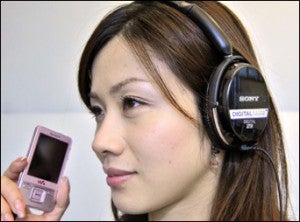 Users of ‘Music Beta by Google’ will be able to upload up to 20,000 songs to "the cloud" — tech speak for storing data on remote servers and then accessing them through an Internet connection. AFP file photo

Called “Music Beta by Google,” the service lets users store their tunes remotely and access them from any compatible device, including mobile phones, tablets and computers. So far, it does not offer music downloads or song sales and it doesn’t let people listen to music they haven’t physically uploaded.

The service will be available by invitation only starting on Tuesday, free of charge while it is being tested. Google announced the new service at its yearly conference for software developers in San Francisco. It did not say whether, or how much, it plans to charge eventually.

Google’s music service comes just six weeks after Amazon.com Inc. announced a similar offering. The online retailer’s service also lets users play songs they have uploaded to the cloud on their computer or on a smartphone that runs Google’s Android. Apple Inc. is also believed to be working on a similar service.

A big hurdle has been getting deals with major record labels. Google did not mention any agreements on Tuesday, though the company has been in discussions with record labels over licensing deals.

The Recording Industry Association of America, EMI and Sony Music declined to comment. Warner Music and Universal Music did not immediately return messages for comment.

Google said users will be able to upload up to 20,000 songs to “the cloud” — tech speak for storing data on remote servers and then accessing them through an Internet connection. Users can create playlists manually, or based on a particular song.

Among the services that Music Beta does not offer is “de-duplication,” which lets users skip uploading their own copies to the cloud if there is an identical file already available. Multiple users could stream music from a single file, and users with large music collections could save a lot of time waiting for perhaps thousands of songs to upload.

“But that is where Google and Amazon are hesitant,” said Julie Samuels, staff attorney for the Electronic Frontier Foundation. “Google seems to believe that it needs a license…to de-duplicate.”

This, she said, is a “perfect example” showing that copyright law is antiquated. Google’s music service, as it stands, is “not as innovative as it could be because Google feels its hands are tied,” Samuels said.

Google, based in Mountain View, Calififornia also unveiled a movie rental service that’s now available on the Android market, its answer to Apple’s app store. Movies are available to rent for $1.99, $2.99 or $3.99.

And in a future-is-now moment, the company previewed a service it is calling Android (at) Home, which lets Android applications interact with appliances and electronic gadgets in the home. It allows Android-based devices to control lights, dishwashers, music players and a slew of other devices.