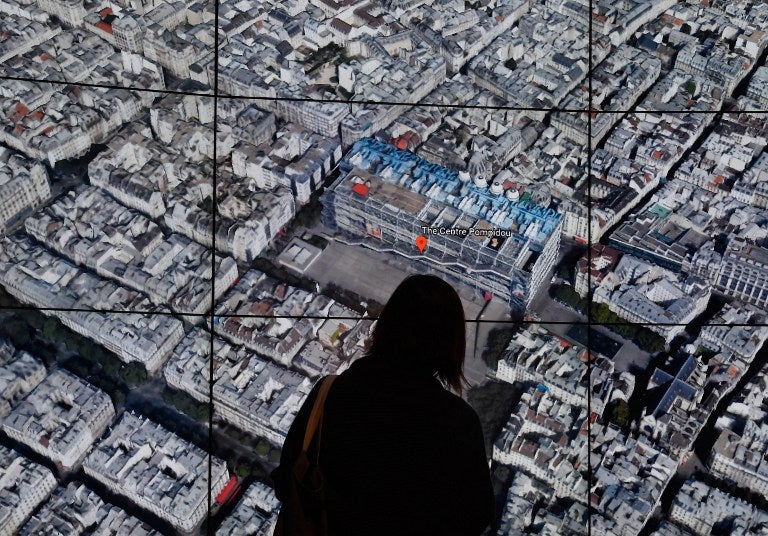 A person looks at a Google Earth map of Paris, France on a screen as Google Earth unveils the revamped version of the application April 18, 2017, at a event at New York’s Whitney Museum of Art. Google on Tuesday launched a re-imagined version of its free Earth mapping service, weaving in storytelling and artificial intelligence and freeing it from apps. AFP

SAN FRANCISCO, United States — Google on Tuesday launched a re-imagined version of its free Earth mapping service, weaving in storytelling and artificial intelligence and freeing it from apps.

“This is our gift to the world,” Google Earth director Rebecca Moore said while giving AFP an early look at the new version of the program that lets people range the planet from the comfort of their computers, smartphones or tablets.

“It’s a product that speaks to our deepest values around education and making information available to people.”

Google artificial intelligence will be put to work for Earth users in the form of “knowledge cards” that let them dive deeper into online information about mountains, countries, landmarks or other places being virtually visited.

It will also make suggestions on other locations armchair explorers might be interested in based on what they have searched in the past.

“This is the first time we have done this deep integration with the Google Knowledge Graph,” Earth engineering manager Sean Askay said.

There is also a newly installed “Feeling Lucky?” feature for people who want to let the software suggest hidden gems such as Pemba Island off the Swahili coast or the Oodaira Hot Spring in Yamagata, Japan.

People can choose to fly around the world in Earth, using a 3-D button to see the Grand Canyon, chateaux of the Loire Valley and other stunning spots from any angles they wish.

“Because we’re doing a lot of the computing in the cloud, it allows you to have Google Earth right on your phone, so you can literally carry the whole world in your pocket,” Earth product manager Gopal Shah told AFP at the New York launch.

“The new version of Google Earth is really about education, it’s really about immersing yourself in places you haven’t been before to get a little bit of an exposure,” he added.

New Earth was launched on Google’s Chrome and Android software, with versions tailored for Apple devices and other internet browsing software promised soon.

It’s the first time that Earth can be reached on a web browser instead of through applications installed on devices.

The move allows Google to tap into more powerful computing power at data centers in the internet “cloud” instead of relying on the capabilities of smartphones and other devices. CBB