PH to launch 2nd microsatellite by 2nd quarter of 2018 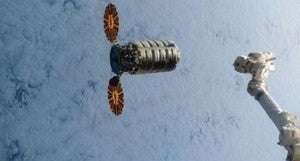 Diwata-1, the Phiippines’ first microsatellite (Photo from NASA via AP)

The Department of Science and Technology (DOST) and the experts behind the country’s first microsatellite marked Diwata-1‘s first year in space on Thursday with an announcement that its winged sister would be launched into orbit by the second quarter of 2018.

Diwata-2, an improved version of the first Filipino-made microsatellite, is set to be sent into space from an H2A rocket operated by Mitsubishi Heavy Industries for the Japan Aerospace Exploration Agency, Leonard Paet, a PhD scholar at Tohoku University in Japan, said at a live video conference.

Weighting 50 kilograms, it will be three kilos lighter than its predecessor but will carry the same payloads as Diwata 1 – four cameras with two additional features, which are an enhanced resolution camera and an amateur radio unit, which can provide alternative means for communication during disasters and emergencies.

“The difference is that Diwata-2 will become more cubic and the weight will be less because we have a limitation with the launch provider,” Paet said. “It’s wings are actually deployable solar array panels to power up the additional features of the microsatellite.”

Unlike Diwata-1, which will be decommissioned at the end of its lifetime approximately around November 2018, Diwata-2 will spend a longer time in space as it will be launched higher at 613 km in a sun-synchronous orbit.

In this case, it will pass over the same part of the Earth at about the same local time each day.

“As everybody will realize at some point, Diwata-1 will be decommissioned at the end of its lifetime,” she said. “So it’s important to have another satellite that would continue its mission.”

With Diwata-2 on a sun-synchronous orbit, the DOST and its experts could do more monitoring of the country’s vast islands and their conditions, she said.

“With Diwata-1, we focused more on assessment since we have a single pass of an area and it’s quite unpredictable when we can get a revisit,” Perez added. “With Diwata-2 being sun-synchronous, we get passes in a more periodic way.”

“So if we have an area, for example, experiencing drought, we can monitor the development of drought on this specific area…that would be the unique addition to what Diwata-1 is currently doing,” she continued.

Diwata-2 is currently being developed by at least 11 Filipino scholars in cooperation with Tohoku University and Hokkaido University. /atm