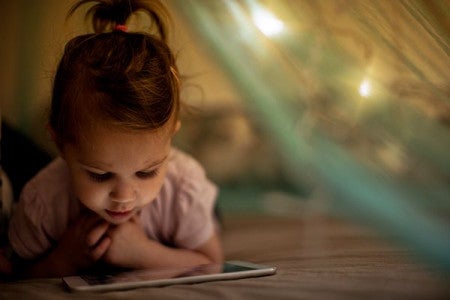 The American Academy of Pediatrics discourages any type of screen media in children younger than 18 months. Image: AleksandarNakic/Istock.com  via AFP Relaxnews

Allowing children to use handheld devices such as smartphones, tablets, electronic games may put them at a higher risk of speech delay, according to a new study set to be presented at the 2017 Pediatric Academic Societies Meeting on Saturday, May 6.

The Canadian research looked at 894 children between the ages of 6 months and 2 years who were participating in TARGet Kids!, a practice-based research network in Toronto.

Parents were asked to report on how much time their child spent with a handheld device, with the team finding that by their 18-month checkups, 20 percent of the children were using a handheld device for an average of 28 minutes per day.

After looking at language delay, the findings showed that the more time a child spent with a handheld device, the more likely the child was to have delays in speech, with each 30-minute increase in handheld screen time resulting in a 49-percent increased risk of speech delay.

However, the team found no association between handheld device screen time and other delays in other forms of communications, such as social interactions, body language and gestures.

The study is the first to report an association between handheld screen time and increased risk of speech delay, and with the number of handheld screens in US homes on the rise, the findings could be particularly important.

The results also support a recent policy recommendation by the American Academy of Pediatrics to discourage any type of screen media in children younger than 18 months.

More research is now needed to better understand the link between handheld screen time and speech delay, and to look at the longer-term effect, commented the researchers.