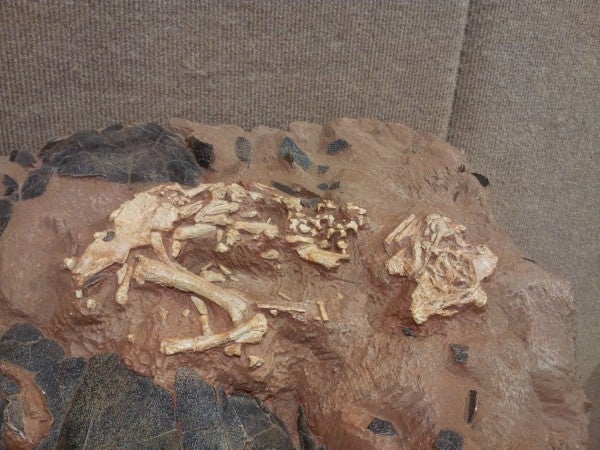 The Beibeilong sinensis – “baby dragon from China” – lived about 90 million years ago and is only the second known species of the giant oviraptorosaur in the world. Image: Philip J. Currie Dinosaur Museum via AFP Relaxnews

Researchers have discovered a new species of giant, bird-like dinosaur that made nests larger than monster truck tires in what is now central China, a study said.

Measuring about eight meters (26 feet) long and weighing up to 3000 kilograms (6600 pounds), the Beibeilong sinensis or “baby dragon from China” lived about 90 million years ago and is only the second known species of the giant oviraptorosaur in the world.

Darla Zelenitsky, a Canadian paleontologist who co-authored the study, told AFP that the Beibeilong would have looked like an “overgrown cassowary,” a flightless bird resembling an emu.

Likely covered in feathers, oviraptorosaurs had robust, toothless beaks and often sported a crest on the top of their heads.

“It has been a big mystery for many years as to which species laid the largest-known dinosaur eggs,” Zelenitsky said. “The identification of the baby skeleton in this study revealed that these eggs were laid by giant oviraptorosaurs, a group of dinosaurs that are very poorly known from fossil bones.”

The discovery, detailed in Nature Communications journal Tuesday, was made using a dinosaur skeleton and egg fossil known as “Baby Louie.”

Baby Louie was among the thousands of dinosaur eggs excavated and collected from Cretaceous rocks by local farmers in central Henan province in the late 1980s and early 1990s.

The specimen was then illegally sold and smuggled into the United States, where it was featured in National Geographic magazine and publicly exhibited at the Indianapolis Children’s Museum.

Though the museum always intended to repatriate the Chinese fossil, the study noted, an agreement for its return was not reached until 2013, when Baby Louie found its final resting place at the Henan Geological Museum.

Because of legal concerns, only after Baby Louie had returned home was a team of Chinese and Canadian scientists able to start researching the specimen, which consisted of the bones of an embryo that died while hatching and 45 centimeter-(17.7 inch-)long eggs found in a ring-shaped clutch. JB