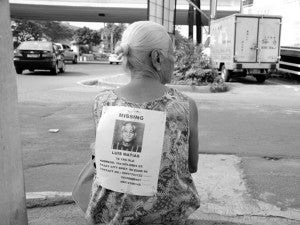 Aurelia Matias’ search for her missing husband is captured on film by amateur photographer Reddie Js.

In return, the 78-year-old woman taught them a lesson about love.

Aurelia Matias’ poignant quest to find her beloved Luis, 78, who had been missing for weeks in the streets of Manila, captured the imagination of thousands after a street photographer snapped her picture and posted it on Facebook (FB).

It quickly went viral as more than 60,000 Facebook users shared, reposted and retweeted the black-and-white photo showing a bespectacled Lola Aurelia, her back facing the camera with the missing person poster pinned to her dress.

With the help of big TV networks covering the unfolding story, a search was launched. Finally, on Tuesday evening, Lola Aurelia found Lolo Luis in a dramatic reunion near the Quirino station of the Light Railway Transit on Taft Avenue.

“Many thanks to the many people helping me. They did not let me down,” she said in an interview aired over “24 Oras,” the evening newscast of GMA network.

“First to God. I know all the people who helped me, God gave you to me,” Lola Aurelia said.

The online campaign to find Lolo Luis began on Monday with a picture posted on Facebook by “Reddie Js,” a street photography enthusiast.

“I saw this old woman sitting by herself yesterday at the corner of Buendia and Roxas Boulevard,” he said in a note that accompanied the photo.

“Surprised to see a sheet of bond paper pinned in front and the back of her dress with a picture of a missing old man, I asked her about it and she said it was her husband who had been missing for two weeks now,” he added.

“I was touched by her integrity and was pained to see her looking for him in that manner so I decided to help her, too. I asked permission to post her picture here in FB to be shared by others as help for finding Mr. Luis Matias,” Reddie said.

The photo drew dozens of comments, mostly expressing support and vowing to help spread the story.

A Facebook user named Allan Du Yaphockun wrote: “My parents (have) been married for 57 years before my father passed away last August. My mother still misses my father so much. It pains me to see a situation like this. Although I am far from Manila. I would comment, like and share this to show concern and spread the search.”

Another, Charmaine Santiago Dee So, said the photograph was so touching it made her cry. “Hope she finds lolo soonest as I can feel her pain. I know God will bless them both and he will find a way,” she posted.

On Wednesday, Reddie expressed joy that Lolo Luis had been found. He thanked everyone who helped, including the GMA and ABS-CBN networks, whose “big machinery,” energized the search, as well as all Facebook users who circulated the picture.

But he said he was most grateful to Lola Aurelia: “Your extravagant way of showing how you love your husband so much that you would go thru such depths of even wearing the posters on your dress was the reason I noticed you,” he wrote.

“It caught my eye, and my heart! That is the simplest reason why you found Lolo again! The picture I took of you is the best picture I know I’ll cherish forever. It is a picture of ‘Love.’ Maraming maraming salamat po (Thanks a lot) Lola!” Reddie said.

Journalist Kara David, who personally joined Lola Aurelia in her search, said she couldn’t help but shed tears as she listened to Lola Aurelia describe her love for her husband.

“I had to ask the cameraman to zoom in to Lola because I didn’t want the camera to catch me crying,” she said in a phone interview.

She said she felt a sense of “community spirit” in the search for Lolo Luis as strangers sent text messages with information about his possible whereabouts, or just simple greetings of best wishes and good luck.

On Tuesday evening, “Lola Aurelia and Lolo Luis” became one of the top “trending topics” on Twitter worldwide, as netizens posted comments on the couple’s moving reunion.

David said Lola Aurelia’s story was a “jewel” among missing persons’ stories because of the kind of person she is.

“She is such an endearing person; she is not your ordinary person. Here you have an elderly woman who will walk long distances to look for her husband. That’s the reason this story became such a hit,” she said.

After several false alarms and various trips around Metro Manila when the information sent via text message or online turned out to be false, David said a concerned citizen eventually sent a tip that someone who looked like Lolo Luis was spotted near the Quirino LRT station.

By then David said she had left to file her story at the GMA offices in Quezon City. “What I did was to leave my cameraman and my driver with Lola Aurelia so they could check out the other places,” she said.

Which is why she was not on the scene during the actual reunion. “I didn’t mind because the story wasn’t about me. It was about Lola Aurelia and Lolo Luis,” she said.

David said there was no “network war” involved in the coverage of Lola Aurelia’s story, and she even credited ABS-CBN as being the first to interview her on Tuesday.

But she said GMA just “got lucky” since her cameraman happened to be with Lola Aurelia for the latter half of the day till early evening when Lolo Luis was finally found, resulting in 24 Oras’ exclusive footage of the reunion. With a report from Lawrence de Guzman, Inquirer Research