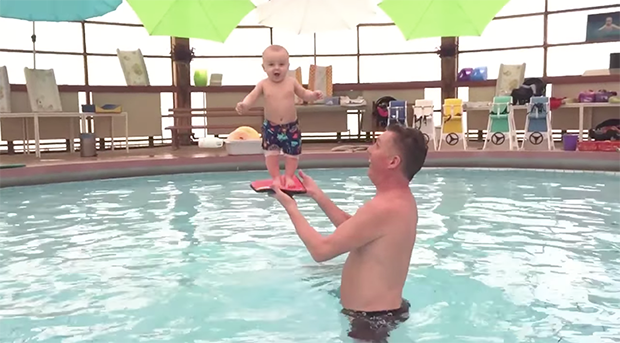 Frosti can stand at five months old. Children are expected to stand between nine and 16 months. Image: Screen grab via Youtube/@Gemini Forskning

Based on studies, between nine and 16 months old, a child can stand on his or her own. However, a baby swimming course can fast-track this development.

Professor Hermundur Sigmundsson of Norwegian University of Science and Technology’s Department of Psychology has been following these courses led by Snorri Magnússon. He found that on average, infants in the 12-week course were able to stand at 4.3 months old.

The instructor puts them through exercises like standing in-hand and on a corkboard for an hour twice a week. The session includes practice for “gross and fine motor activities,” such as picking up rings from the water and diving into the water with assistance.

Watch this video of Arna, who is less than four months old, learning to stand:

Eleven of 12 infants in the study were able to stand for over 15 seconds after the sessions. The twelfth infant stood for eight seconds. But what is remarkable is that the babies don’t forget how to stand once they’ve learned the skill.

The trainings appear to demonstrate how learning involves “freezing and releasing” the “degrees of freedom” within the body, specifically in controlling and coordinating the ankle, knee, hip and trunk. In learning to stand, the infants “adopted a stiff posture” which may show that they are “freezing” the degrees of freedom to “acquire a skill before further experience and training enable them to release the degrees of freedom.”

The scientists also concluded that these trainings show the “complex interaction” between genetics and the environment, both of which influence the human developmental process. They cited that genetics is only the “starting point” in the learning process.

“Children can do more than we think,” said Sigmundsson, who conducted the study with Associate Professors Håvard W. Lorås and Monika Haga. Niña V. Guno/JB