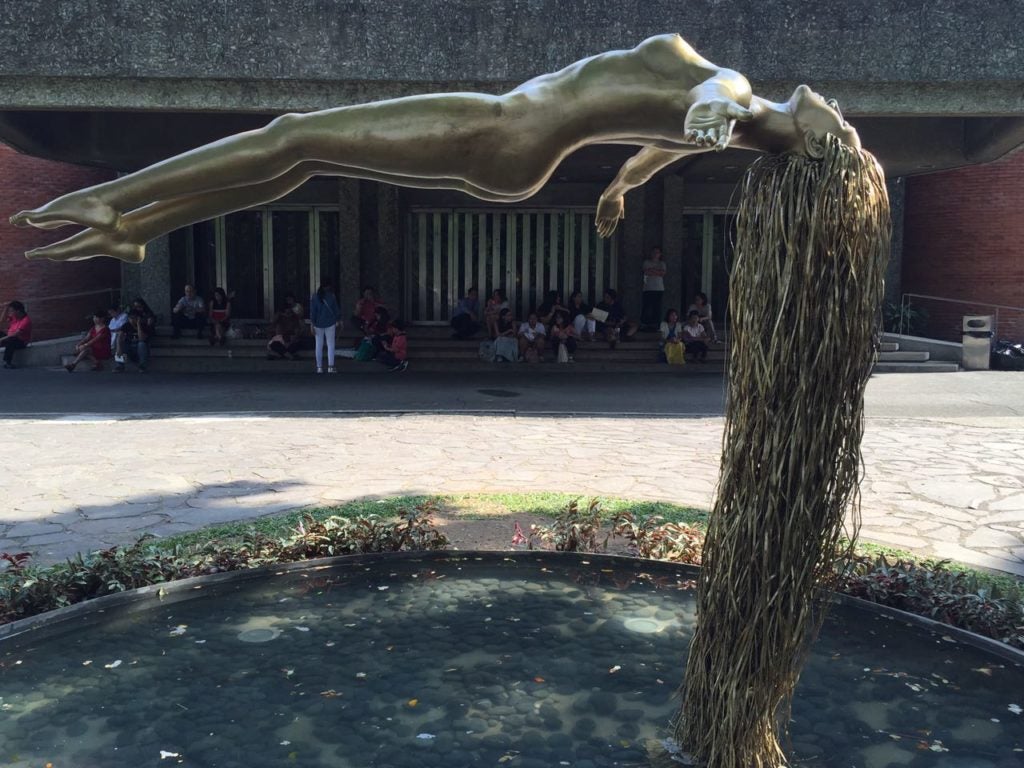 The “UPLift” sculpture at the University of the Philippines-Diliman by artist Ferdinand Cacnio. MARC JAYSON CAYABYAB

The controversial “UPLift” sculpture at the University of the Philippines Diliman has caused quite a stir among netizens and even in the academe, rousing debate about the originality of art and its role in empowering, or disempowering, its subject.

The image of the sculpture of the lithe body of a woman rising heavenward with her long strands of hair rooted firmly to the ground was a hot topic on social media since the artist Ferdinand Cacnio posted the photo of his work on Facebook.

In his Facebook post which garnered 13,000 likes and 2,400 shares, Cacnio said it took him 10 years to finish the sculpture, which was part of his series of works representing the female nude.

It took only a few hours before members of the academe took to social media to brand the sculpture as disempowering, unoriginal, and a product of the male gaze exploiting the female form.

Netizens quickly pointed out the similarity of Cacnio’s work with that of Elisabet Stienstra’s “Virgins of Apelboorn,” a public installation art in the Netherlands with the same concept of the female body in trance.

In another post, UP Film Professor Choy Pangilinan said he does not believe Cacnio’s defense in his own post that he has not heard of Stienstra’s work when he made “UPLift.”

Cacnio maintained that his work was his own and not plagiarized.

“Before today, I had never seen nor heard of Ms. Stienstra or her work. Hindi ko siya kilala (I do not know her). We’ve never been to the Netherlands. I was not inspired by her, I did not model my work after hers. I am not guilty of plagiarizing or copying her work, ‘Virgins of Apeldoorn.’ #UPLIFT is my own creation,” Cacnio said on Facebook.

Prof. Pangilinan said it was only proper for an artist to create his or her own style and reconsider making the art work if the artist obtained inspiration elsewhere.

(As much as possible, one should strive to create his own direction and style).

If Cacnio was aware his work had already been created elsewhere, he should have then attributed his art if was inspired by another one’s work, Pangilinan said.

(If he was aware, he needs to clarify and attribute his influences. Art appropriation is not a license to get away with proper attribution. If there is no attribution, that is plain stupidity.)

Cacnio’s wife and daughter came to his defense on Facebook, calling him an honest man who has no intention of plagiarizing another’s work.

His daughter Bianca said her father did not intend to copy another’s work, and that the similarities in concept between “UPlift” and “Virgins of Apeldoorn” was mere coincidence, not plagiarism.

“When you look at a single picture, with the two side by side, cropping the work of Stienstra… Sure, they seem similar, so similar you’ll think it might have been copied. If you look beyond, at the background of both artists, details, intentions, and the like, I do hope you’ll realize they are just that, just similar at a glance,” Bianca said on Facebook.

“They are truly very different. You cannot mistake one for the other, each artwork has its own identity… They’re not plagiarizing each other. They are simply creating works of art of the same subject matter and pose, in their own styles and self-expression. It is not plagiarism. Nobody owns a subject,” she added.

Cacnio’s wife Bing said her husband has always made sculptures of the same subject of the female body in movement, and even of male nudes, citing Cancio’s 2006 work “Pasasalamat” in Bonifacio Global City of two nude fishermen expressing gratitude to God for a bountiful harvest.

“If you would only do a review of how his artworks have developed over the years, you would not be quick to think the worst. His body of works will speak for him. And people who know him well will attest to his good moral character and integrity,” Bing said on Facebook.

Bing said her husband was a civil engineer interested in cantilevered art, and that his sculptures, mostly female dancer sculptures, “showed movement and lightness, capturing the female form in mid dance motion.”

UP Art Studies professor Jeff Giron said “UPLift” should not be easily misconstrued as a plagiarized work only because the two works both resemble the female body in a reclining form.

Besides Stienstra’s “The Virgin of Apeldoorn,” Giron also named the following sculptures of similar form — Cabanel’s “The Birth of Venus” and Jacques Loysel’s “La Grande Nevrose,” where the female nude is represented as a passive figure, not in control of her body, even “fetishized” and “sexual.”

“Google ‘nude paintings’ or ‘female nude art’ and thirty percent of the time, you will find the subject lying in this state. Cacnio’s and Stienstra’s works are not copies of each other. They just happen to share uncanny similarities,” Giron said.

Giron said the two works may be similar but they have differing “contexts” and “references,” and that Cacnio only subscribed to a “cliche” female form such as that of a ” floating-nude-in-ecstasy” or the “mother-and-child.”

“Plagiarism happens, true. But we should not be too quick to cry plagiarism the moment we see two works that look alike… Cacnio did not copy. He subscribed to a cliché. And I don’t think anyone can claim originality when it comes to that,” Giron said.

Giron, however, pointed out at how “UPLift” was a product of Cacnio’s “male gaze” in representing the female nude, in the same way the female form has been typecasted in art by male artists as the “water nymph” or the “diwata” (fairy).

“I see this more as a water nymph, sensual, somatic, and in a state of ecstasy — a typical depiction, usually by male artists, of the mystified feminine energy. This comes from a larger visual arts tradition where the woman is presented as a passive figure, like the bathing nude, the dalagang bukid by the stream, and the half-naked forest diwata,” Giron said on Facebook.

Giron also took exception at calling the sculpture the “female Oblation,” calling out the tendency to create “gender binaries” that serve to perpetuate gender roles between a man and a woman that only serve to put the woman in the shadows of a man.

“This obsession with male-female counterparts is problematic, not only in terms of gender binaries and heteronormative pairings. But also because, why can’t a female sculpture have her own identity? Why is the new female UP icon constructed around a strong male figure, and made to stand (or in this case, float) in his shadows?” Giron said.

Cacnio’s daughter Bianca said his father did not intend to make “UPLift” the female Oblation, and that the sculpture represents an offering, a sacrifice, of a woman to her country, similar to the concept behind the male UP Oblation.

“It was inspired by the UP Oblation. We say this to give homage to the piece. However, UPLift is not the female Oblation. It is not the counterpart, nor is it a female version. It is UPLift,” Bianca said.

While the two sculptures share uncanny similarities, the female lithe body was not merely in a reclining trance, but in a rising position, meant to empower the female body and not put her in a submissive pose, Bianca said.

“I think this pose was specifically chosen to become public art in UP Diliman, because it embodied UPLift, and UP the most… The imperfection in the asymmetrical way he made her reflects that she is human. She is not lying down, she is not sleeping, and she is not in surrender. She is rising,” Bianca said.

The sculpture was meant to embody honor and excellence, especially with her arms open to “embrace knowledge” as a means for “self empowerment,” she said.

“It’s in the title itself, of UPLift. We uplift ourselves, and others. Oblation is about giving self to others, and service. While UPLift also has aspects that relay that, it is not just that,” Bianca said.

Giron said he saw the other way around — he saw a sculpture of the female body reified a deity as her body was about to rise to the heavens, instead of the body rooted firmly on the ground to be among the people.

“If it really is about honor and excellence as the original post suggests, it appears to be ascending to the heavens in a process of deification.. I would prefer the character to be looking ahead, feet on the ground, still of the earth, and among the people,” Giron said.

Instead of being a representation of offering one’s honor and excellence to the nation, Giron said the sculpture only appeared to be sacrificing herself to the heavens, “to be among the gods,” instead of being with the people.

Such an interpretation could hardly represent the UP student’s honor and excellence of serving the people and being among the masses, Giron said.

“This can never be farther from what an iskolar ng bayan needs to be today, more than ever. Her honor and excellence should be grounded on the people’s experience, cultivated not for the sake of being one of the gods but a servant of the people,” he said. JE