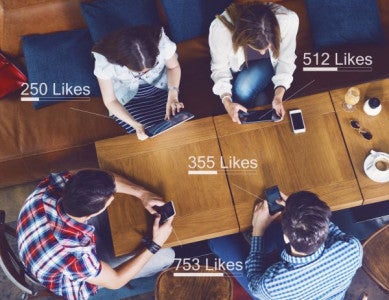 According to recent estimates, the average Facebook user spends 35 minutes a day on the social media website, with a new study by Brigham Young University revealing this week that these users fit into one of four different types.

Facebook has clearly been a huge success since it opened up to the public back in 2006, with the social media site now boasting 890 million daily users, and nearly 2 billion checking it each month.

However, although we know it is popular, the study’s lead author Tom Robinson questioned, “What is it about this social-media platform that has taken over the world?”

“Why are people so willing to put their lives on display? Nobody has ever really asked the question, ‘Why do you like this?'”

Robinson and his fellow researchers from Brigham Young University in the United States, sought to answer some of the questions around why people use Facebook, asking participants to respond to a list of 48 statements, rating each on a scale from “most like me” to “least like me” before being interviewed by the researchers.

Based on the responses, the team identified four categories of Facebook users: relationship builders, town criers, selfies and window shoppers.

Relationship builders are those who post in response to others’ posts and use Facebook to maintain and strengthen their real-life relationships. “They use it as an extension of their real life, with their family and real-life friends,” Robinson said.

Selfies, said co-author Kris Boyle, use the platform “to present an image of themselves, whether it’s accurate or not.”

Town criers however are not interested in sharing photos, stories or information about themselves. Instead they “want to inform everybody about what’s going on,” said Robinson.

They repost news stories and announce events, but may often neglect their own profile pages, and prefer to communicate with family and friends through alternative methods.

Window shoppers, like town criers, also feel a sense of social obligation to be on Facebook but rarely post personal information. These users, said study co-author Clark Callahan, “want to see what other people are doing. It’s the social-media equivalent of people watching.”

Facebook users may identify with characteristics from more than one category. Boyle noted that most people have at least some selfie tendencies. But users typically identify more with one profile than others. “Everybody we’ve talked to will say, ‘I’m part of this and part of this, but I’m mostly this,'” said Robinson.

The findings can be found published online in the International Journal of Virtual Communities and Social Networking. JB