Science Says: Not all cancers need treatment right away 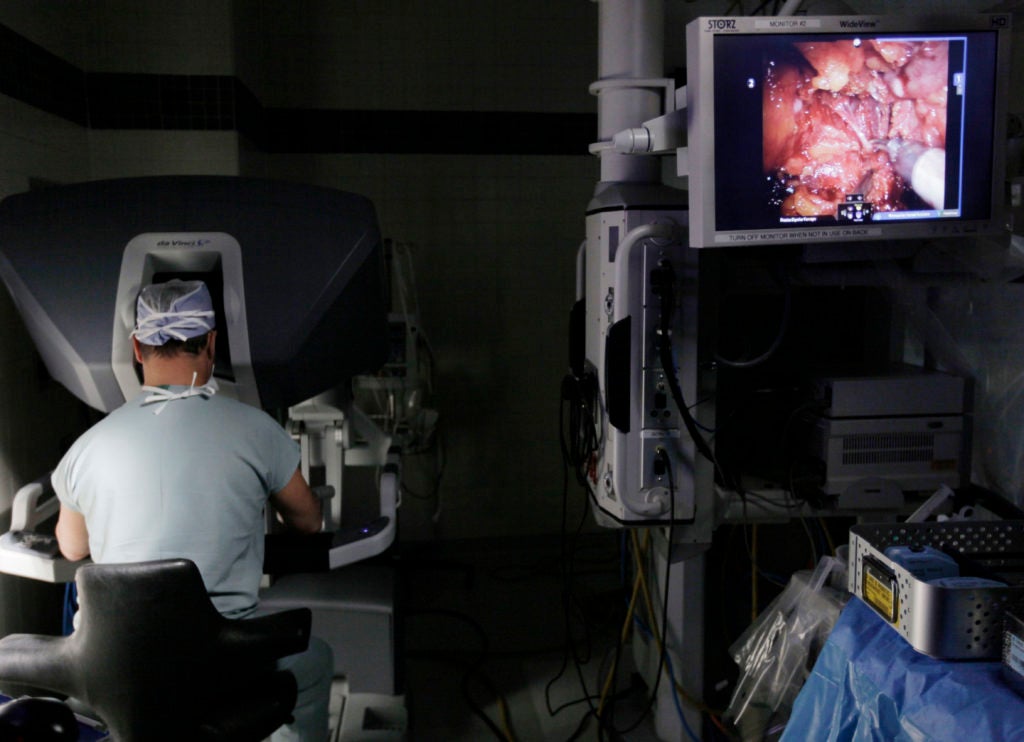 In this Oct. 13, 2009 file photo, a surgeon performs robotic prostate surgery on a patient in Chicago. According to a report released on Wednesday, July 12, 2017, long-term results comparing different approaches for men with cancers confined to the prostate show that after 20 years, death rates were similar for those who had immediate surgery as for those initially assigned to monitoring. AP

The biopsy shows cancer, so you have to act fast, right? Not necessarily, if it’s a prostate tumor.

Men increasingly have choices if their cancer is found at an early stage, as most cases in the U.S. are. They can treat it right away or monitor with periodic tests and treat later if it worsens or causes symptoms.

Now, long-term results are in from one of the few studies comparing these options in men with tumors confined to the prostate. After 20 years, death rates were roughly similar for those who had immediate surgery and those initially assigned to monitoring, and surgery had more side effects.

“Many men, when they hear the word cancer, you want to do something about it,” said one study leader, Dr. Gerald Andriole, urology chief at Washington University in St. Louis, Missouri. “The reality is, if you have a low-risk cancer, like the study shows, you don’t need treatment, certainly not urgently.”

It’s not all black and white, though. Early stage doesn’t necessarily mean low risk. Some results in the study lean in favor of surgery, and it does have some advantages. It also may improve survival for certain groups. Here’s what this and other studies tell us about who does and doesn’t benefit from surgery.

WHY NOT TREAT EVERYONE?

Start with a fact many find hard to accept: Not all cancers are destined to kill. Some prostate tumors are deadly, but most grow so slowly that men will die of something else.

Treatments — surgery, radiation or hormone therapy — can cause impotence, incontinence, infections and other problems, and sometimes do more harm than the disease ever would.

Monitoring doesn’t mean do nothing. Men can get frequent tests, and there are more and better ways to detect disease progression now than there used to be, so there’s usually still a chance to treat and potentially cure it if it starts to worsen, Andriole said.

WHAT THE EVIDENCE SAYS

Only a few studies have tested monitoring versus immediate treatment. One found no difference in death rates after more than 20 years; another found surgery improved survival odds, but only for men under 65.

Those were done before wide use of PSA blood tests, back when more tumors were found because they caused symptoms, which often means more advanced disease.

Researchers wondered: Would the results be the same with modern screening and treatments?

The new study, sponsored by the U.S. Department of Veterans Affairs, aimed to answer that. Doctors assigned 731 men to observation or surgery. After a decade, survival rates were similar, but doctors wanted longer follow-up.

Now, after 20 years, two thirds of these men have died and the original conclusions still stand, though the numbers leaned in surgery’s favor. Fewer men died in the surgery group, but the difference was small enough that it could have been due to chance. Only about 9 percent of men ultimately died from prostate cancer, showing how relatively seldom the disease proves fatal.

Results are in Thursday’s New England Journal of Medicine.

DID SURGERY DO ANY GOOD?

Yes. Fewer men in the surgery group later had treatment because there were signs the disease might be worsening — 34 percent, versus 60 percent of the group assigned to monitoring. In many cases, it was prompted by rising PSA levels, but surgery also clearly prevented more cases from spreading throughout the body.

Half of the group assigned to monitoring wound up getting some sort of treatment within five years. In one quarter of those cases, men “just got fed up” with monitoring and thinking about cancer, Andriole said. The rest were prompted by signs of progression.

Surgery also may have improved survival for men in the middle range of risk, with PSA levels between 10 and 20, and a Gleason score (a measure of how aggressive cancer cells look under a microscope) of 7. Only about one quarter to one third of men in the U.S. fall in this category, though. Most men are early stage and low risk.

“Surgery is right for the right person, and it’s somebody with intermediate-risk disease,” Andriole said.

Surgery had more side effects — 15 percent of men in that group later sought treatment for trouble having sex, and 17 percent, for incontinence. The numbers were 5 percent and 4 percent, respectively, of men assigned to observation.

“You can’t divorce quality of life outcomes from cancer outcomes because they both count for patients,” said Dr. David Penson, Vanderbilt University’s urology chief, who had no role in the study.

“Some guys will look at this and say, ‘I don’t want to be impotent, I don’t want to be incontinent,'” and will forgo surgery even if there’s a chance it will help them live longer, he said. “In the end, each man’s going to make his own decision.” CBB