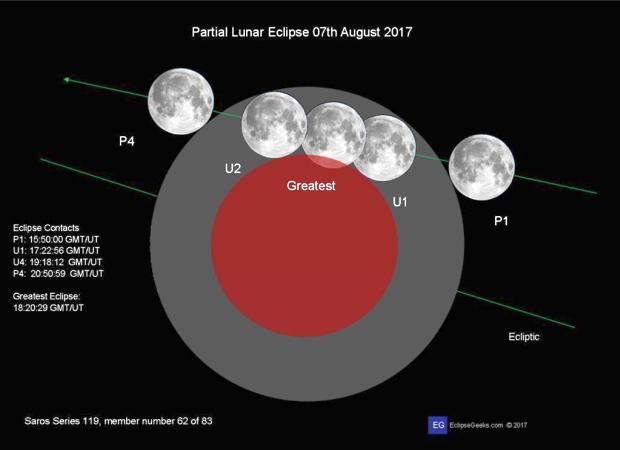 Keep your eyes on the night sky this coming week as it will serve up some astronomical treats, starting with a partial lunar eclipse on Monday and ending with the Perseids meteor shower on Sunday.

In its astronomical diary for August, the Philippine Atmospheric, Geophysical and Astronomical Services Administration (Pagasa) said the partial lunar eclipse would occur before midnight on Aug. 7 until the wee hours of Aug. 8.

Lunar eclipses are usually characterized by the moon or a portion of it turning reddish, as the sun, Earth, and full moon align or nearly align.

During a lunar eclipse, the Earth, situated between the sun and the moon, blocks the sunlight from shining directly on the moon as the moon passes through the Earth’s umbra, or the core of its shadow.

On Monday, “the umbral eclipse magnitude will be 25 percent,” Pagasa said, making the eclipse a partial one.

An illustration prepared by Pagasa showed that the eclipse will cause only a sliver of the moon to have a reddish color.

“Lunar eclipses are safe to watch. Hence, observers need not use any kind of protective filters for the eyes,” read the astronomical diary prepared by Cynthia P. Celebre, the chief of the Pagasa Research and Development and Training Division.

“A pair of binoculars will help magnify the view and will make the red coloration of the moon brighter,” Pagasa added. “The lunar eclipse will also be visible in western Pacific Ocean, Oceania, Australasia, Asia, Africa, Europe, and the easternmost tip of south America.”

A solar eclipse will also occur on Aug. 21 to 22, but won’t be visible in the Philippines. It will be visible in Hawaii, North America, and most parts of South America, westernmost Europe, and West Africa, Pagasa said.

Meanwhile, given clear skies and little light, the Perseids meteor shower can be observed in the late evening on Saturday, August 12, until the early morning hours of August 13. At its peak, stargazers may even spot at least 50 or more meteors.

The meteor shower appears to radiate out from the constellation Perseus, which is located in the eastern horizon during August, Pagasa said.

“August is one of the most popular time of the year to observe meteor showers,” Pagasa said. /atm