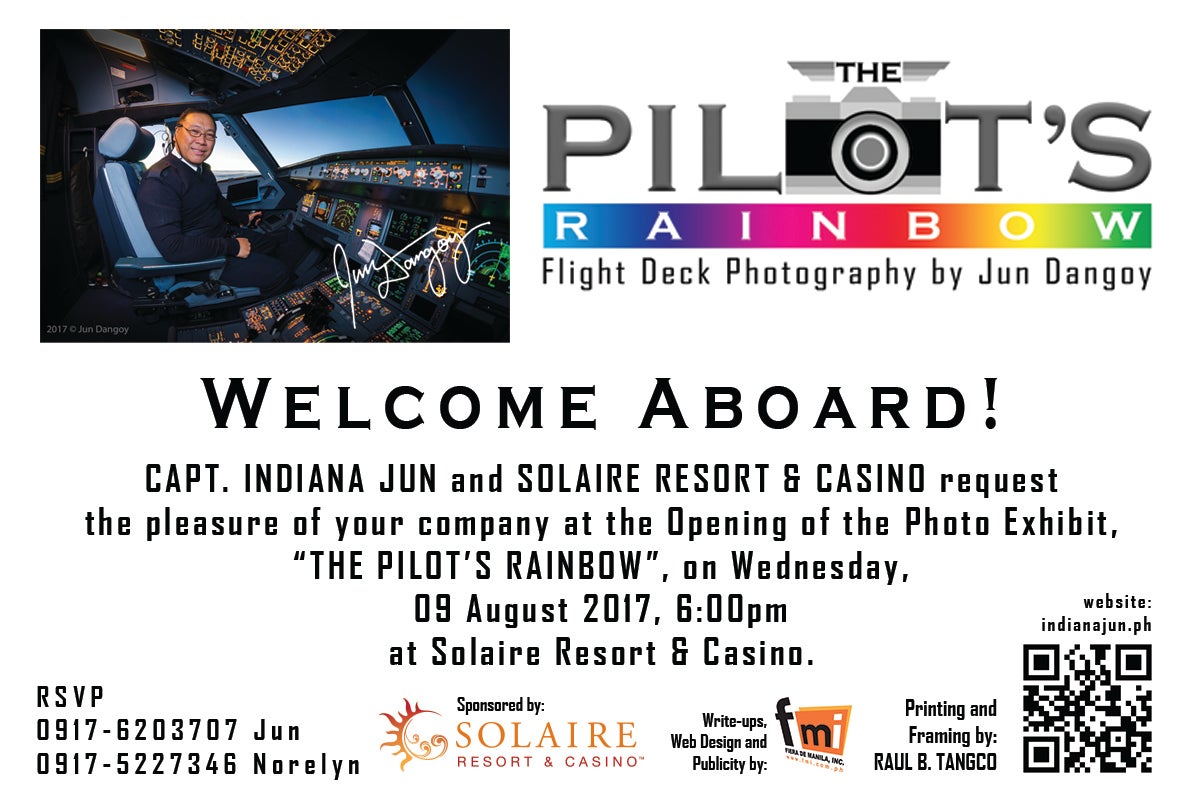 One of the most beautiful phenomenon in flight is called ‘the pilot’s rainbow or pilot’s halo’.
As the captain turns on the ‘Fasten Seat Belt’ sign, sit back and relax. Captain Petronilo ‘Indiana Jun’ Dangoy Jr., opens a captivating photo exhibit taken from the flight deck on August 9 – September 30, 2017 at Solaire Resort and Casino. 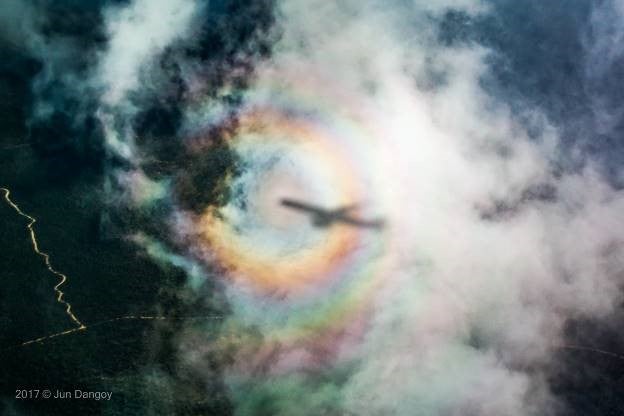 The Pilot’s Rainbow – One of the most beautiful phenomenon in flight is called the pilot’s rainbow or pilot’s halo. As the aircraft casts its shadow on a cloud saturated with ice crystals, the sun forms a halo with a concentric spectrum of colors. It is so rare that in my 31 years of flying I only saw this halo twice and was only able to shoot it once. This is the photo.

Captain Jun Dangoy, Jr. shares a unique perspective of showcasing pictures not commonly seen by most people. He spruces his work with pleasure as he takes photos from 33,000 feet above the earth. He pilots commercial passenger twin-engine jet liner Airbus A320 of Philippine Airlines flying to local and international destinations.

He was born on September 22, 1961, to Captain Petronilo Dangoy, Sr. and Milagros Dangoy. As the only son in the family, Jun is influenced early in life by his father in photography and aviation. 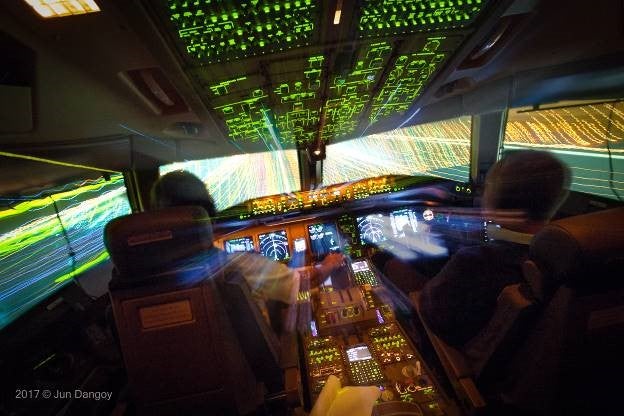 Takeoff – One of the most critical phases of flight is the Takeoff. This was taken at night during takeoff roll on a Boeing 777 as the aircraft lifts off and leaves several light trails coming from the runway lights.

He picked up his first SLR, a Pentax Spotmatic, when he was still in high school. The camera also boasts of a well-constructed lens jointly developed by Zeiss and Praktika—two well-known lens makers from Germany. Indiana Jun spent countless hours in his home darkroom developing and printing his own photographs.

In 1980, he joined his first photography workshop conducted by two local hotshot lens men, Leo Pumanes and Ador Pamintuan. The graduates of that workshop eventually formed a camera club named ‘Kameradare’. As a way of sharing their passion for the craft, the club organized workshops which later spread into different school chapters in the 80’s and 90’s. 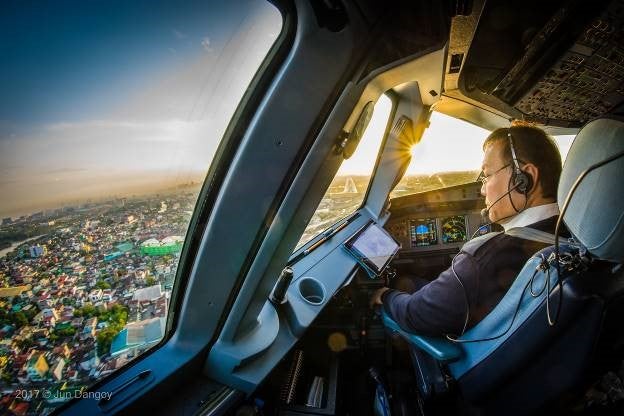 On Final Approach – Pasay City and Paranaque wakes up to a beautiful morning as I was on final approach for landing Manila Runway 06.

Jun Dangoy’s itch to grow more and explore new avenues in the craft led him to join another camera club in 1993 – known for its toughness and excellence in the craft. The name of the club is Zone V Camera Club. It became popular as it dominates major local and international photo contests. He became a major contender in the club’s monthly competition, amassing trophies after trophies, and participating club exhibits around the metropolis. 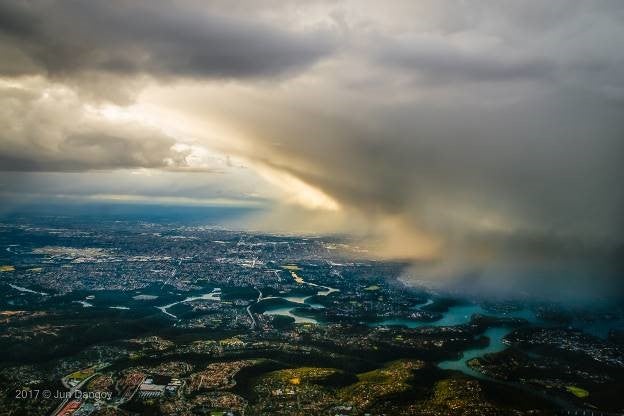 Morning Storm (VFTD-3)- On a morning arrival in Australia, this heavy downpour was in progress. This kind of weather phenomenon is fleeting and ends within 20-30 minutes. Luckily, we landed far from this weather

Indiana Jun ventured on his own by partnering with his fellow Kameradare colleagues. He opened Concepts Photography Studio that specialized in advertising and portrait photography.

Morning Storm (VFTD-3)- On a morning arrival in Australia, this heavy downpour was in progress. This kind of weather phenomenon is fleeting and ends within 20-30 minutes. Luckily, we landed far from this weather

As one of the early adopters of technology, he went into a project called ‘Wyzzard Imaging’. It was one of the first companies in the country to use purely digital photographic processing.

After a full circle in photography, Indiana Jun has to fulfill another dream in his life by joining Philippine Airlines, as a pilot. Indiana Jun studied further to acquire more skills as he piloted an Airbus A340, A330 and later a Boeing B777. These are medium to large size, long range, wide body, with twin turbojet engines, commercial airliner.

Indiana Jun has also several stints with international airlines like, Sri Lankan Airlines, China Airlines and Etihad Airways flying Airbus A320, A330, A340 and Boeing B777. This experience brought him to countries around the world which led to another exciting development. 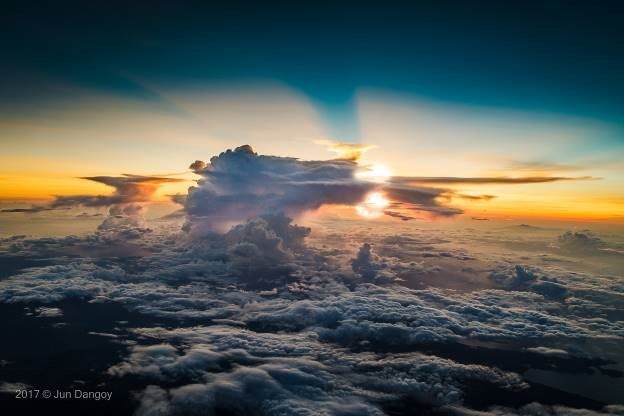 An Ode to Dawn – It may still be cloudy and dark on the ground, but up here, God is showing its morning glory.

Just as everyone thinks Indiana Jun has forgotten his photography, he actually did not. He simply morphed into a fusion of photography and aviation. This brings him to a unique, new world. In between piloting huge aircraft, Indiana Jun’s heart never stops appreciating the beauty of nature as seen from the flight deck. He has a rare opportunity of seeing what many mortals do not see. Indiana Jun, with a photographer’s DNA embedded in his system, continues to photograph captivating moments of nature’s surprises. Those magical sunrise and sunsets never escape Indiana Jun’s camera.

This photo exhibit is Indiana Jun’s way of sharing nature’s bounty as seen from the pilot’s seat.