HBO’s string of bad luck continues, as its social media accounts has been the latest target by cyber hackers.

After having 1.5 terabytes of sensitive data stolen—along with leaked scripts and episodes of fan favorite “Game of Thrones” (GoT)—the network’s  Twitter handle was the latest to fall into the wrong hands.

An unknown individual or group who identified itself as “OurMine” took control of HBO’s main Twitter account, along with the official handles of  “GoT” and “Westworld”.

“Hi, OurMine are here. We are just testing your security,” a tweet from the GoT page read, which has since been deleted. “HBO team please contact us to upgrade the security.”

Subsequent posts on the studio’s Facebook page also showed attempts to get the #HBOleak a trending topic. 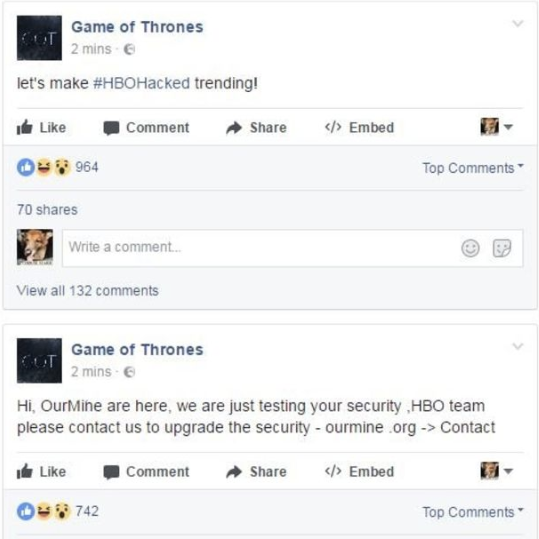 Screen Grab from Facebook/Game of Thrones

Meanwhile, HBO continues to be on lookout for leaks, as a substantial amount of company documents and new episodes of shows  “Curb Your Enthusiasm” and “Insecure” were stolen as well, BBC reported.