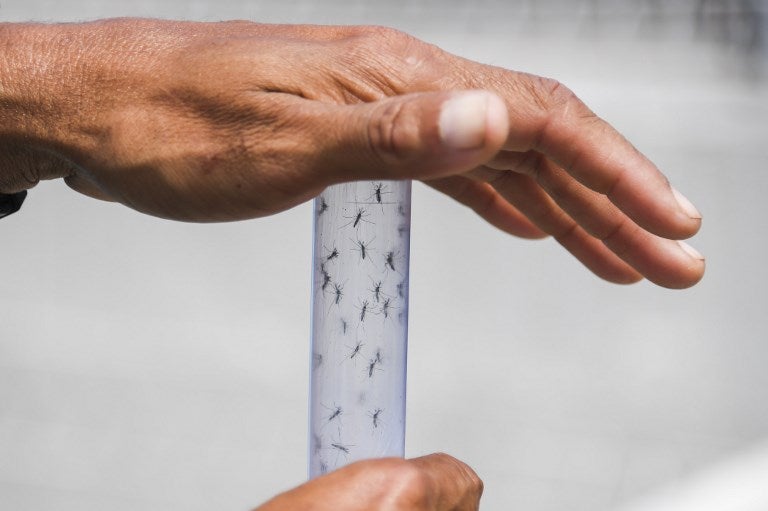 Experts form the Brazilian Fiocruz Institute release Aedes aegypti mosquitoes infected with a bacteria that prevents them from spreading dengue, Zika and Chikungunya at Ilha do Governador in Rio de Janeiro, Brazil, on August 29, 2017.
The mosquitoes will infect others in their species, reducing the population which transmits the diseases. AFP

RIO DE JANEIRO—Brazilian scientists on Tuesday began to unleash the first of millions of mosquitoes infected with a bacteria meant to prevent the insects from transmitting the dengue virus to humans.

Thousands of Aedes aegypti mosquitoes carrying the bacteria were released in front of journalists by scientists from the Fiocruz institute in Rio de Janeiro.

The hope is that they will then breed and spread the bacteria, denting the insect population’s ability to spread dengue and other viruses including Zika and chikungunya.

READ: Mosquitoes released in China in fight vs dengue fever

Scientists have been preparing the project — developed by Australians who first put the Wolbachia bacteria into mosquitoes — since last year.

Dengue causes fevers, rashes, nausea and in some cases can be fatal, while Zika has been blamed for serious birth defects.

In 2016, fears over Zika led to the United Nations health body to declare an international health emergency, ending in November.

Fiocruz plans to release 1.6 million infected mosquitoes a week, later stepping that up to three million.

“We found that when an Aedes aegypti mosquito has this (bacteria), it blocks or reduces the capacity of the mosquito to transmit viruses like dengue, Zika and chikungunya,” said the head of the dengue program at Fiocruz, Luciano Moreiro.

“So the idea is that when they are released, they will transmit this, as if they were immunizing the other mosquitoes and therefore transmission will be reduced.”