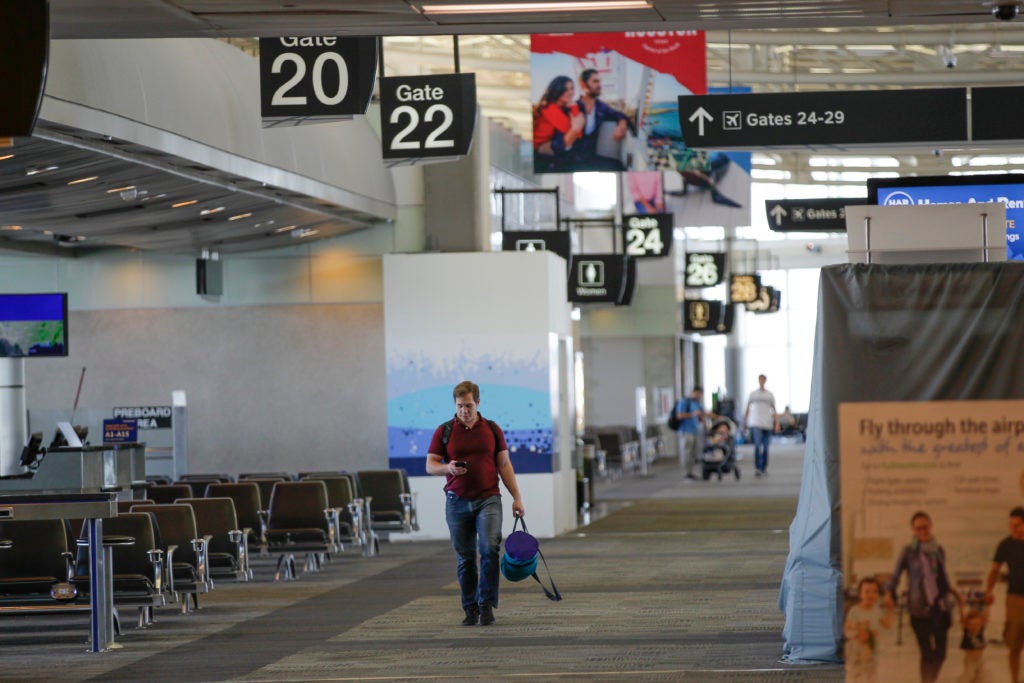 Tyler Franz, of Charlotte, N.C., walks in William P. Hobby Airport, Thursday, Aug. 31, 2017, in Houston. Franz was supposed to have headed home on Sunday, but was delayed by Hurricane Harvey. The airport is starting to ramp up and stranded passengers are starting to heading home soon. (Steve Gonzales/Houston Chronicle via AP)

NEW YORK —Roads, refineries and other infrastructure have taken a beating in the Texas and Louisiana regions hit by Harvey — but cellphone networks so far remain largely functional.

One reason: Big carriers brought in supplemental equipment and backup power and turned to drones to diagnose problems.

Four Gulf Coast counties northeast of Corpus Christi, Texas, had more than half of their cell towers knocked out earlier in the week, but crews have been able to restore many of them. As of Thursday, one of the most heavily hit areas, Aransas County, reported 32 percent of its 28 towers out.

That’s down from 95 percent right after the weekend’s storm, according to data from the Federal Communications Commission.

Throughout the affected region, slightly less than 4 percent of cell towers were out.

While cellphone services fared well, hundreds of thousands of people lost landline or other wired phone services, according to the FCC. Some 911 centers had to transfer calls to neighboring centers, while some television stations lost broadcast capabilities.

Here’s a look at communications in the affected regions.

All told, the devastating storm knocked out fewer than 400 of the 7,804 cell towers in the affected counties; just 296 were down as of Thursday. By contrast, Hurricane Katrina disabled more than 1,000 cell towers in 2005.

Cell towers typically have backup batteries and generators so they can keep operating in a power outage. The problem comes when generators run out of fuel. Verizon spokeswoman Karen Schulz said crews prepared by topping off all generators ahead of the storm. The company also bought spare fuel and had refueling trucks on standby at key locations.

In a few cases, there’s been damage to the fiber lines that connect cell towers to communications centers. In such cases, it might be possible to get a signal, but the data isn’t going anywhere. Schulz said Verizon has microwave technology to temporarily bridge those gaps.

As of Thursday, only 7 of the region’s 911 centers were out of service, all in Texas, although all were able to reroute calls to neighboring call centers. That’s down from 11 on Wednesday.

Four of those centers still aren’t able to get callers’ location information automatically, which can be a problem if the caller is unable to speak. Earlier in the week, two centers were down completely, but both have since been restored.

The bigger problem is call volume. Many callers in the Houston area were placed on hold until a dispatcher was free, said Trey Forgety of the nonprofit National Emergency Number Association. In a few cases, callers got busy signals.

“We’re part of the telephone era, so if you want to move calls around (to neighboring centers), you have to go physically rewire things,” he said.

The FCC said that at the peak of the outage, at least 283,000 households lost wired phone services — both traditional landlines and internet phones such as cable. That was down to about 270,000 by Thursday, a slight uptick from Wednesday. In comparison, Katrina knocked out more than 3 million phone lines.

People are far less dependent on wired phone services these days. U.S. households with only cellphone service hit a majority for the first time in the second half of 2016, according to a government survey.

The FCC said two Texas television stations — KFDM and KBTV in Beaumont — were out of service as of Thursday, one less than the day before. The outages appeared to affect only over-the-air broadcasts, as the stations streamed their channels online.
Several radio stations also lost service — nine as of Thursday, all in Texas. Five stations were down on Wednesday.