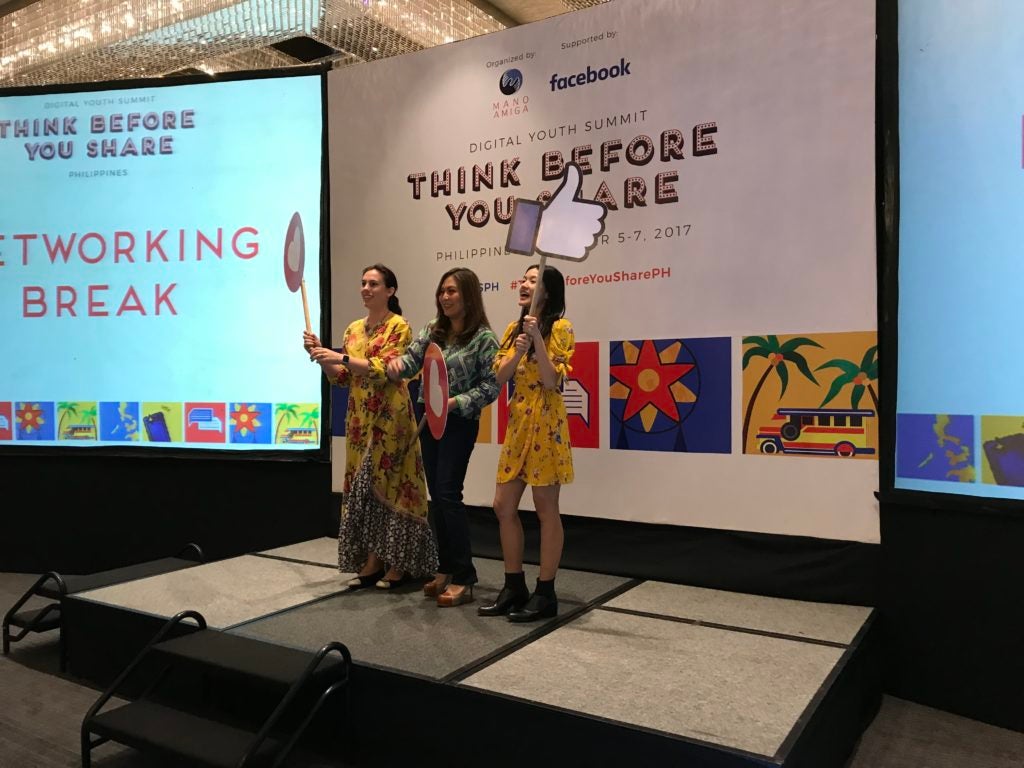 Television and radio broadcaster Karen Davila warned against “connecting the dots” despite “doing good research” at the second day of the “Think Before You Share” Digital Youth Summit hosted by social media network Facebook and Mano Amiga Academy Philippines on Friday, Oct. 6.

Speaking before 75 student leaders chosen to participate in the summit, the veteran journalist expounded on different forms of fake news that are circulating the internet.

Davila started with what she referred to as the most basic one: “So what’s fake news? One, anything one completely made up,” she said.

The host of ANC’s “Headstart” also demonstrated the effects of sharing malicious and offensive stories on social media. She proceeded to fabricate a story where the crowd at the summit was so infuriated by her talk that they began throwing water bottles at her.

“One of you can make that now, share it on Facebook,” Davila said. “If no one makes the effort to correct: ‘that didn’t happen! You’re a liar!’ What will happen? That becomes ‘truth.’ People assume it’s true.”

Another form of fake news, according to Davila, is pushing an agenda using half-truths.

“So you can give half-truths. The government has a point to say, ‘Why Karen, why does media quote 13,000 killed? The police only say 9,000?’ That’s a good point. So media has to explain where they’re getting the numbers,” she said.

The third form of fake news given by the news personality was one employed by an unspecified blogger who attended Wednesday’s Senate hearing on fake news.

“If you re-angle a whole event wherein many things are true, and you connect the dots and you make it untrue… and I won’t mention names, you do good research, you dig, it’s factual, but then you connect the dots by yourself and then push that angle, then that’s fake news,” she said.

Davila further added: “Anybody can have a conspiracy theory and then they put it out (and say) this is the truth, that doesn’t make it news. Unless you have proof.”

The newscaster could be alluding to Rey Joseph Nieto, the administrator of “Thinking Pinoy” blog, who attended the Senate hearing and was described by Senator Grace Poe as “doing good research.”

Davila ended her talk on the inherent trait found in every fake news article.

“A lie is a lie, no matter how you really go around it. There’s no such thing in fake news as: ‘This is a mortal sin and this is a white lie.’ The minute it’s inaccurate and it’s wrong it’s already fake, the only difference is who’s behind it,” she said.

The “Think Before You Share” Digital Youth Summit is now on its second day of its Oct. 5 to Oct. 7 run.

The event hosted Facebook and Mano Amiga Philippines is being held at the Ascott Bonifacio Global City. /jpv

TOPICS: Facebook, fake news, karen davila, mano amiga, Social Media
Read Next
Technology crammed into cars worsens driver distraction
EDITORS' PICK
Mandaluyong fire put under control hours after it started
Leveling up your ‘lutong bahay’ with the kitchen companion you never knew you needed
Bato de la Rosa, Risa Hontiveros back bill increasing female recruitment quota in PNP
Quarantine violations still punishable despite deleted provisions in ‘Bayanihan 2’ – Bato dela Rosa
Someone from the Philippines can become $356 Million richer this Tuesday
Cherry Mobile teams up with Cloud Panda PH, launches online store
MOST READ
‘If I had not been SolGen, I will make you eat your words,’ Calida tells Coco Martin
51 percent of German firms holding back investments in PH, but not because of COVID-19
5 car dealership outlets shutting down
Quarantine passes no longer required under GCQ, but curfew remains
Don't miss out on the latest news and information.