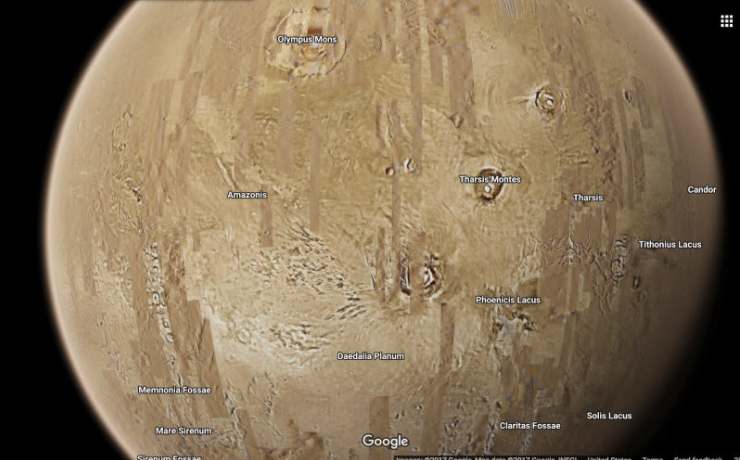 Google Maps has certainly turned once seemingly inaccessible places possible for the human eye, with its state-of-the-art web-mapping system.

Now, the serviceable application can also be used to take a peak at Earth’s planetary neighbors.

A recent update, as per The Verge, now provides access to over a dozen distant planets and moons.

Through the use of multiple spacecrafts including the Cassini probe, users can now zoom out of Earth and venture into Mercury, Venus, Pluto, the International Space Station, as well as multiple icy moons that orbit distant planets.

“During its mission, Cassini recorded and sent nearly half a million pictures back to Earth, allowing scientists to reconstruct these distant worlds in unprecedented detail,” Google announced the new feature through a blog post.

Furthermore, users can now re-create the journeys of Cassini and other spacecrafts while seated in front a computer.

Currently, the feature is undergoing improvements, as some netizens pointed out that some of the moons appeared to have mislabeled craters and features.  Khristian Ibarrola /ra

ADVERTISEMENT
TOPICS: Cassini Aircraft, Google Maps, moons, Planets, updates
Read Next
Self-taught, ‘superhuman’ AI now even smarter — makers
EDITORS' PICK
Mandaluyong fire put under control hours after it started
Leveling up your ‘lutong bahay’ with the kitchen companion you never knew you needed
Bato de la Rosa, Risa Hontiveros back bill increasing female recruitment quota in PNP
Quarantine violations still punishable despite deleted provisions in ‘Bayanihan 2’ – Bato dela Rosa
Someone from the Philippines can become $356 Million richer this Tuesday
Cherry Mobile teams up with Cloud Panda PH, launches online store
MOST READ
‘If I had not been SolGen, I will make you eat your words,’ Calida tells Coco Martin
5 car dealership outlets shutting down
51 percent of German firms holding back investments in PH, but not because of COVID-19
Senate OKs bill authorizing president to postpone opening of classes beyond August
Don't miss out on the latest news and information.