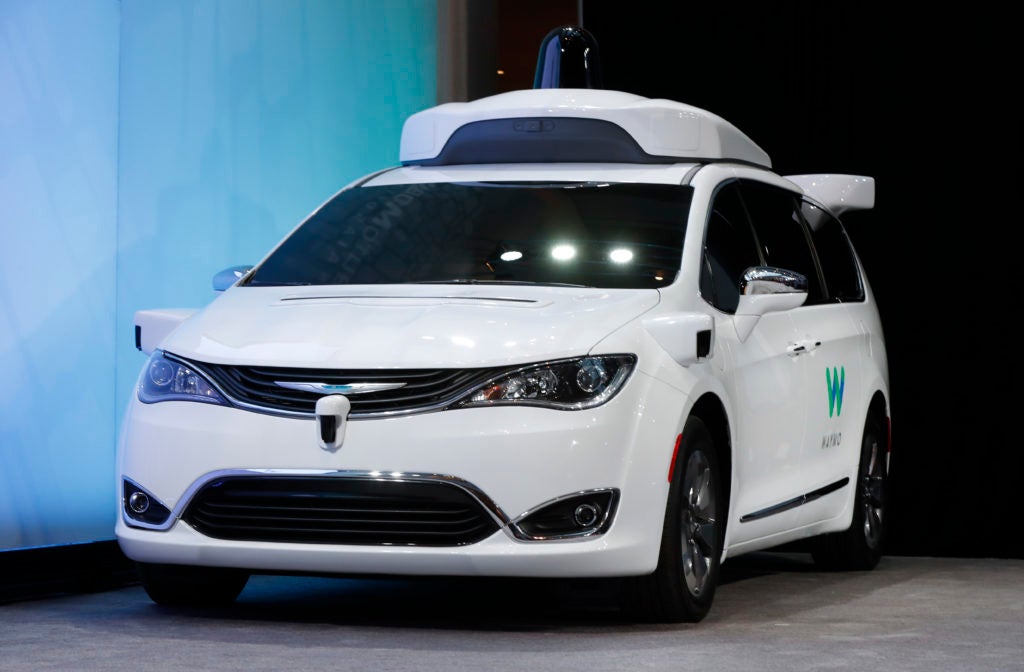 A Chrysler Pacifica hybrid outfitted with Waymo’s suite of sensors and radar is shown at the North American International Auto Show in Detroit last January 8, 2017. Waymo is testing vehicles on public roads with only an employee in the back seat. The testing started last Octover 19 with an automated Chrysler Pacifica minivan in the Phoenix suburb of Chandler, Arizona. It is a major step toward vehicles driving themselves without human backups on public roads. (AP FILE PHOTO/Paul Sancya)

DETROIT – A self-driving car company created by Google is pulling the human backup driver from behind the steering wheel and would test vehicles on public roads with only an employee in the back seat.

The move by Waymo started October 19 with an automated Chrysler Pacifica minivan in the Phoenix suburb of Chandler, Arizona. It was a major step toward vehicles driving themselves without human backups on public roads.  The company also said it would launch a ride service to compete with Uber and Lyft.

Waymo, which is owned by Google’s parent company Alphabet, is in a race with other companies including Delphi, General Motors, Intel, Uber, Apple, and Lyft to bring autonomous vehicles to the public. The companies said the robot cars are safer than human drivers because they do not get drowsy, distracted, or drunk.

Google has long stated its intent to skip driver-assist systems and go directly to fully autonomous driving. The Waymo employee in the back seat would not be able to steer the minivan, but like all passengers, would be able to press a button to bring the van safely to a stop if necessary, according to the self-driving car firm.

Within a “few months,” the fully autonomous vans would begin carrying volunteer passengers who are now taking part in a Phoenix-area test that includes use of backup drivers.

The company said the self-driving ride service would be the first application of the technology.

“We want the experience of traveling with Waymo to be routine, so you want to use our driver for your everyday needs,” said Waymo CEO John Krafcik, as he announced the test on Tuesday at a conference in Portugal.

The company intends to expand the testing to the entire 600-square-mile (1,500-square-kilometer) Phoenix area and eventually bring the technology to more cities around the world. It is confident that its system could handle all situations on public roads without human intervention.

“Our system runs thousands of checks on itself every second,” Krafcik said. “With these checks, our systems can instantly diagnose any problems and pull over or come to a safe stop if needed.”

The company also said it has redundant braking, steering, power, and computing systems so it never has to rely on a human driver.

Sam Abuelsamid, senior analyst for Navigant Research, said Waymo’s tests without a human backup are the first to his knowledge on public roads at normal speeds. He said that the company picked Phoenix because weather conditions are ideal for testing with no snow and little rain, adding that Waymo knows its system is not ready yet for inclement weather even with camera, radar, and laser sensors.

“This demonstrates Waymo’s confidence in the ability of these vehicles to function at least in this environment,” Abuelsamid said.

He said he expects General Motors and its Cruise Automation autonomous vehicle unit to be the next to announce testing without human backups, followed by auto parts maker Delphi, which recently acquired Massachusetts Institute of Technology self-driving software startup nuTonomy.

Waymo would not say how many vehicles would be in the initial test or exactly how wide an area it would cover. The test would take place in a small area at first, then spread to portions of five cities and 100 square miles (260 square kilometers) in the Phoenix area. Eventually it would go to the whole metro area.

The company also would not say how many minivans are taking part in the initial testing. It has a fleet of 100 autonomous vans in Phoenix, with plans to add 500.

Waymo said it has an operations team that can answer questions from the cars’ computers, but the cars will make driving decisions.

The company said it has been testing its autonomous systems for the past eight years with more than 5 million miles logged on public roads.

Waymo is hoping to infuse its technology into ride-hailing services such as its current partner, Lyft, and big-rig trucking companies. It also intends to license its automated system to automakers such as Fiat Chrysler Automobiles, which makes the Pacifica minivan.     /kga