‘Bots battle for the ball, and the globe, in Robot Olympiad 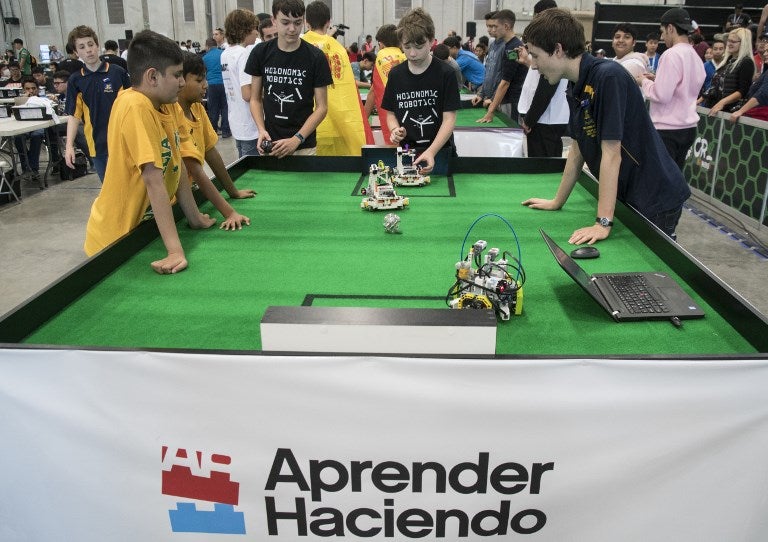 Miniature robots play soccer as participants look on during the World Robot Olympiad at a convention center in San Rafael, Alajuela, 22 km west of Costa Rica on November 10, 2017.
This year’s edition is the first taking place in Latin America. AFP

SAN JOSÉ, Costa Rica — The World Robotics Olympiad, being held in Costa Rica this weekend, shows human athletes still have little to worry about: sweat and glory do not compute well when relegated to faceless automatons.

But the same may not be true for workers, especially those in menial or transport activities where robots are steadily taking over. Think factory assemblers and sorters, or even self-driving cars.

Some of the technology behind the robot revolution could be seen in the Olympiad, which gathered more than 2,500 people from more than 60 countries in a vast hall on the outskirts of Costa Rica’s capital San Jose — the first time the event, now in its 14th year, has been held in the Americas.

Others rolled across tables seeking out blocks of certain colors and sizes to grab and place within demarcated zones.

It was all more than child’s play for the contestants representing their countries, aged from six to adult.

“We have to do it in the system and make the robot take the color and go to the pieces that we want. So it’s very difficult,” he said.

The teen, who hopes to be a mechanical engineer in the oil industry, admitted he had picked up tips from watching other competitors’ practice sessions. He and other tech-savvy youngsters crowded around dozens of tables — computers or robots in their hands — to observe.

At one table, a group of Australian teens fine-tuned their contraptions trying to win possession of a palm-sized transparent “soccer” ball containing a sensor. The robots were able to detect the ball, grab it while fending off rivals, and protect the goal area.

Being at the Olympiad, surrounded by equally bright peers from around the world, was eye-opening for the teens.

“We’ve never been to an international competition before, so it’s a new experience. I can really only compare it to the competitions we’ve had in Australia — in Australia we’ve done pretty well,” said Tiernan Martin, 13.

The competition over the weekend was being judged in several age categories, as well as in the football, university and open tournaments.

This year, the environment was the overriding theme — an area in which Costa Rica is at the forefront.

Thus, robots had to show their usefulness in sustainable tourism (identifying protected areas), carbon neutrality (planting trees), and clean energy (seeking out the best places to set up wind turbines).

Costa Rica’s science and technology minister, Carolina Vasquez Soto, told AFP her country won the right to host the Olympiad — hitherto held mostly in Asia — “for the participation we’ve had in sustainability, because we are contributing to that with more and bigger resources.”

On the larger question of what robots, and the associated field of artificial intelligence, now represent for human workers, the national organizer for the World Robotics Olympiad, Alejandra Sanchez, was upbeat.

While some see robots as a threat to jobs, she said she saw them as an opportunity.

“I think it’s really good. It’s good they replace human beings in some tasks. But we are not being discarded — we’re changing the functions for human beings,” she said.

“Before, a human being was the one painting cars, for example. Now we have a robot painting vehicles and a human being controlling the robot…. So, it’s a personal opinion, but I believe robots are here to stay, and here to help humanity.” /cbb