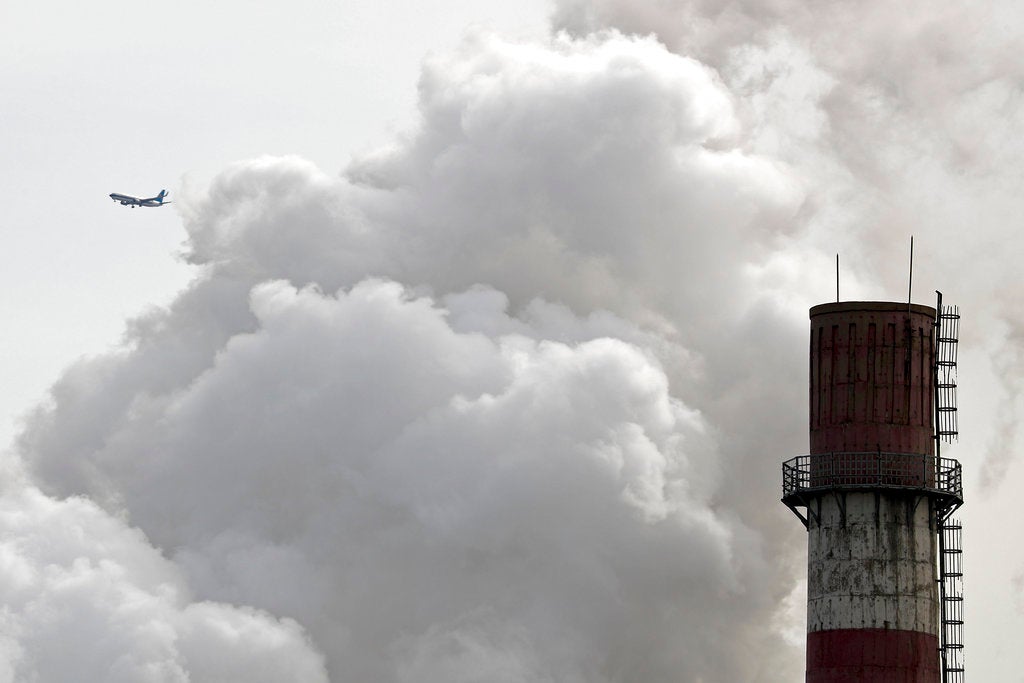 FILE – In this Feb. 28, 2017 file photo, a passenger airplane flies behind steam and white smoke emitted from a coal-fired power plant in Beijing. On Monday, Nov. 13, 2017, scientists projected that global carbon pollution has risen in 2017 after three straight years when the heat-trapping gas didn’t go up at all. (AP Photo/Andy Wong, File)

WASHINGTON (AP) — Global carbon pollution rose this year after three straight years when levels of the heat-trapping gas didn’t go up at all, scientists reported Monday.

Preliminary figures project that worldwide carbon dioxide emissions are up about 2 percent this year, according to an international team of scientists. Most of the increase came from China.

The report by the Global Carbon Project team dashed hopes that emissions from the burning of coal, oil and gas had peaked.

“We hoped that we had turned the corner… We haven’t,” said study co-author Rob Jackson, an Earth scientist at Stanford University.

Carbon dioxide emissions rose steadily and slowly starting in the late 1880s with the Industrial Revolution, then took off dramatically in the 1950s. In the last three years, levels had stabilized at about 40 billion tons of carbon dioxide (36.2 billion metric tons).

“It’s a bit staggering,” said co-author Ralph Keeling, a Scripps Institution of Oceanography scientist, noting in an email that levels have increased fourfold since he was born in the 1950s. “We race headlong into the unknown.”

This year’s increase was mostly spurred by a 3.5 percent jump in Chinese carbon pollution, said study co-author Glen Peters, a Norwegian scientist. Declines in the United States (0.4 percent) and Europe (0.2 percent) were smaller than previous years. India, the No. 3 carbon polluting nation, went up 2 percent.

The 2017 estimate comes to on average of 2.57 million pounds (1.16 million kilograms) of carbon dioxide spewing into the air every second.

The study was published Monday and is being presented in Bonn, Germany, during climate talks where leaders are trying to come up with rules for the 2015 Paris deal. The goal is to limit temperature rise to 2 degrees Celsius (3.6 degrees Fahrenheit) since preindustrial times, but it’s already warmed half that amount.

“It was tough enough and if this paper is indicative of long-term trends, it just got tougher,” said Princeton University climate scientist Michael Oppenheimer, who wasn’t part of the team of 76 scientists who wrote the report.

While he called the study authoritative, Pennsylvania State University climate scientist Michael Mann said he sees no need to do figures for 2017 that are not complete, saying it may be “jumping the gun a bit.”

Jackson said the team — which produces these reports every year in November — has confidence in its 2017 report because it is based on real data from top polluting nations through the summer and in some cases through October. Plus, he said past estimates have been correct within a couple tenths of a percentage point.