Traffic Navigator named IT product of ’11 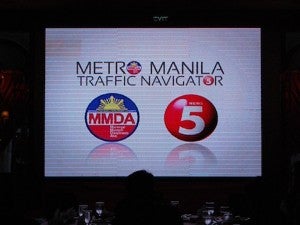 The TNAV, which was conceptualized and developed jointly with InterAksyon.com, the online news and public affairs arm of broadcast network TV5, bested other nominees such as the Apple iPad 2, Epson’s new Ink Tank Printers, Smart Communications’ Net Phone and “Ultrabooks” powered by Intel chipsets.

“The Tnav has quickly become an indispensable tool for motorists, saving thousands of man-hours, preventing wasted fuel and empowering our constituents with valuable information that they use to beat traffic,” said MMDA traffic discipline director Yves Gonzales.

The Tnav, which users can access on several online platforms, shows real-time visual representation of the traffic situation at major thoroughfares in Metro Manila.

The service uses data culled from the MMDA’s monitoring operations. The free service can be accessed online at mmdatraffic.interaksyon.com. Mobile applications are also available for Android OS and Apple iPhone, iPod and iPad users.

Gonzales, a professional application developer before joining the MMDA, said the agency and partner InterAksyon.com planned to introduce more features to the Tnav next year.