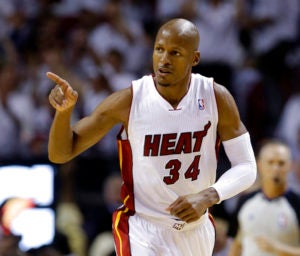 FILE – In this May 30, 2014, file photo, Miami Heat guard Ray Allen gestures after scoring a three-point basket during the first half of Game 6 in the NBA basketball playoffs Eastern Conference finals against the Indiana Pacers, in Miami. Retired NBA star Ray Allen believes he is a victim of “catfishing,” and has asked a court to throw out a case where he is accused of stalking someone he met online. Allen filed an emergency motion in Orange County, Florida, on Tuesday,Nov. 21, 2017, one day after Bryant Coleman told the court he is being stalked by the 10-time All-Star and two-time NBA champion. (AP Photo/Lynne Sladky, File)

MILWAUKEE — Using social networks to create fake personas to harass or defraud someone would be illegal under legislation lawmakers are considering in Wisconsin, the latest state to address a scam known as “catfishing.”

Just this week, retired NBA star Ray Allen told a Florida court he was the victim of catfishing by a man trying to extort money from him. Allen’s attorney said in a court filing Tuesday that a man online “pretended to be a number of attractive women interested in Ray Allen,” and then accused the former basketball star of stalking.

“It is becoming all too pervasive,” said state Sen. Janet Bewley, a Democrat co-sponsoring the legislation.

The measure would make it a misdemeanor to pretend to be someone else in emails or social networks “with the intent to frighten, intimidate, harm, threaten, abuse, harass, defraud, or obtain a benefit” from another person.

Republican state Rep. Bob Kulp said he heard stories of online impersonation before introducing the bill and learned from the Wisconsin Department of Justice that current law didn’t address the issue.

He said he didn’t want to “oversell the bill as stopping all activity” because it would only apply to offenses in Wisconsin.

“You’re never going to be able to stop the Nigerian prince from doing what they do,” he joked, but added that he hopes that as more states pass laws addressing the crime it will be easier to prosecute with reciprocity agreements.

The bill had a public hearing in the state Assembly on Nov. 16, but has yet to receive a vote.

Last year, Oklahoma became one of the most recent states to address catfishing with a law that gives victims legal recourse to stop impersonators and seek monetary damages. The law, like Wisconsin’s proposal, does not apply to social media accounts that are parodies or satire.

About a dozen states, including California, New York and Texas, already have laws against online impersonation.

A woman who testified for the Wisconsin bill, Madison resident Linda Johnson, told lawmakers of instances where friends and her son almost fell prey to scams. In her son’s case just a few weeks ago, someone pretending to be from the Internal Revenue Service called him and warned that he would be arrested if he didn’t pay $7,000 in owed taxes.

That type of fraud by phone is already covered by state law, but Johnson, 64, said it’s important that online cons be covered as well.

“I think it should be tackled extremely urgently because the unscrupulous are getting more and more techy in how they can take money from people,” she said