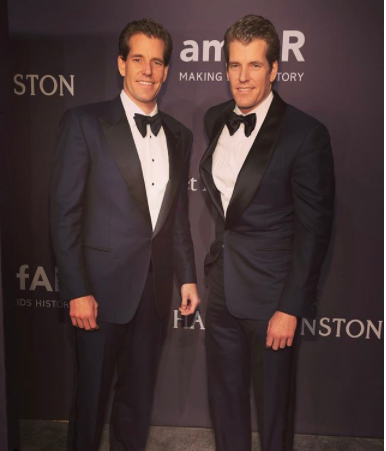 Dubbed as “Winklevi” in the 2010 biographical drama “The Social Network,” the identical twins have reportedly cashed in on their hefty Facebook payout and now own one of the largest portfolios of bitcoin.

According to Fortune, the brothers took their $65 million from the 2011 lawsuit and invested $11 million of it into the cryptocurrency in 2013.

Four years later, their stock has risen to $1 billion—an impressive return in just a short amount of time.

Even before the unprecedented surge of the now popular cryptocurrency, the siblings refused to sell a single one of their bitcoins, the report said.

This proved to be a wise decision, as the currency is now valued at $11,247 coin—a far cry from the $120 value when the brothers first invested.

“If Bitcoin is a better gold or seen as a type of gold-like asset, then it could be in the trillions on a market cap,” Tyler Winklevoss described their investment in a 2105 report from CNN Money.  “We do feel those are very real possibilities.”

Aside from acquiring wealth from bitcoin, the brothers also tried to create an exchange-trade fun for the cryptocurrency early this year, but was denied by the US Securities and Exchange Commission.  Khristian Ibarrola /ra