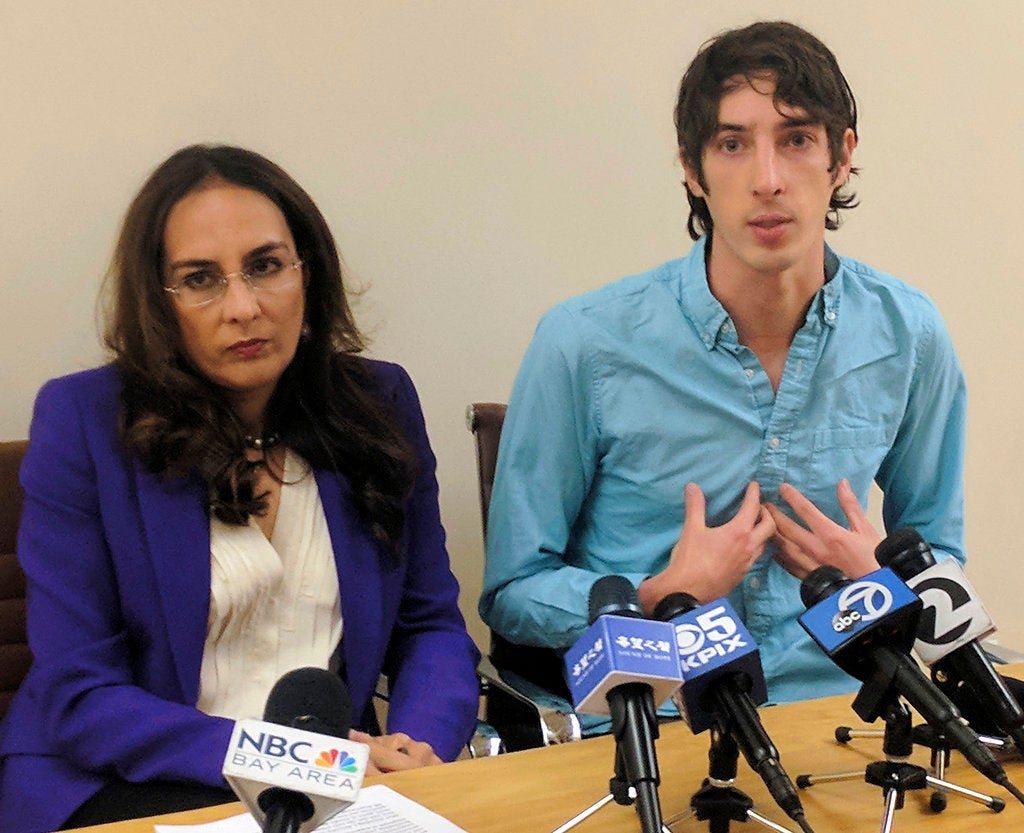 James Damore, right, a former Google engineer fired in 2017 after writing a memo about the biological differences between men and women, speaks at a news conference while his attorney, Harmeet Dhillon, listens, Monday, Jan. 8, 2018, in San Francisco. Damore discussed his lawsuit alleging that Google discriminates against workers with conservative opinions. AP

SAN FRANCISCO, United States — A Google engineer fired for writing a memo questioning Google’s commitment to diversity has filed a lawsuit alleging his ouster was driven by a corporate culture that discriminates against white men and people with conservative views, including supporters of President Donald Trump.

The 161-page complaint filed Monday on behalf of James Damore and another former Google engineer depicts Google as an elitist company that shuns employees who dare to deviate from a liberal agenda embraced by its management and most of its workforce.

The lawsuit was filed in Santa Clara County Superior Court and comes five months after Google fired Damore for writing a 10-page memo entitled “Google’s Ideological Echo Chamber .” In that missive, Damore criticized Google for pushing mentoring and diversity programs and for “alienating conservatives.” He also blamed biological differences for the paucity of women in tech.

Damore, 28, says he submitted early versions of his memo to Google’s human resources department without being reprimanded. Just a few days after Damore posted the memo on an internal message board, it was leaked to a technology blog. Google fired him Aug. 7 amid an uproar among workers offended by its themes.

Now, Damore and his lawyer, former Republican Party official Harmeet Dhillon, are retaliating with a lawsuit that puts a new twist on Silicon Valley’s lack of diversity — an issue that has been a prickly subject in the technology industry for years.

Google, Facebook, Apple and their peers have all publicly acknowledged their workforces are out of step with the rest of society because they employ mostly white and Asian men in engineering jobs and other high-paying positions requiring computer programming skills.

As a remedy, the companies say they have been aggressively hiring women, blacks and Hispanics, but they have barely titled the scales so far.

Dhillon is hoping to use Damore’s case to prove that Google has set illegal quotas that discriminate against white men like Damore.

The complaint also seeks to be certified as a class action that will represent all current and former Google workers who believe they were discriminated against during the past four years for expressing conservative viewpoints, a group that also could include women.

Google said it looks forward to defending itself against Damore’s accusations in court.

Dhillon said she has heard from dozens of current and former workers at Google and other major technology companies who say they fear being ostracized or threatened by managers and co-workers if they express conservative views or publicly support Trump — an unpopular figure throughout most of the San Francisco Bay Area.

“You shouldn’t have to prove you didn’t vote for the president to get a job at Google,” Dhillon said.

Damore declined to say whether he voted for Trump in the 2016 presidential election.

Google never has given any indication that it fired Damore for his political views. Instead CEO Sundar Pichai said Damore had violated the company’s code of conduct “by advancing harmful gender stereotypes in our workplace.”

After his memo was widely circulated, Damore said he was verbally bullied and threatened by co-workers. In an Aug. 4 email included in Damore’s lawsuit, a Google engineer wrote, “You’re a misogynist and a terrible person. I will keep hounding you until one of us is fired.” The email ended with a profanity directed at Damore.

Google said it doesn’t tolerate any form of harassment.

Despite his rancorous parting, Damore said he would welcome the opportunity to work at Google again. “I really believe I could improve things there,” he said. /cbb