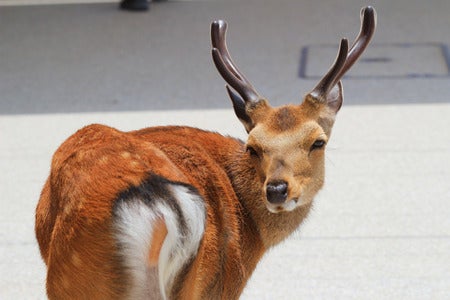 It barks, but it certainly doesn’t bite.

Trains in Japan are being fitted with speakers that emit sounds of dog barks and deer snorts to keep wild animals away from railroad tracks.

Tokyo newspaper The Asahi Shimbun reports that deer sighted from trains were reduced by over 40 percent after a team at the Railway Technical Research Institute (RTRI) used the animal-sound imitations. Tests were conducted late at night due to common deer sightings at this time.

The researchers conceived a system where deer snorts are blared for three seconds to alert deer in the vicinity. This is based on deer’s behavior of producing short and shrill sounds to warn other deer of danger.

Dog yaps then take over for 20 seconds to scare deer away, as wild animals tend to be afraid of dogs.

The simple but resourceful technology aims to be in use by the end of 2018. More experiments are being planned to measure its effectiveness further. Scientists also hope to blare the alerts in deer-populated areas so that people living near the tracks won’t be bothered.

According to SoraNews24, deer are attracted to train tracks for their nutritional value: iron. The country has taken other measures to protect deer, such as mineral licks dropped in the woods so that the animals don’t need to wander further for their daily dose of iron.

Another ingenious effort was having lion dung poured on the tracks, but this was abandoned after it would get washed away by the rain.

The country’s transport ministry said that in 2016, there were 613 cases of wild animal collisions which caused delays of 30 minutes or more, reports BBC.  Niña V. Guno /ra