How to go running without your wallet or phone 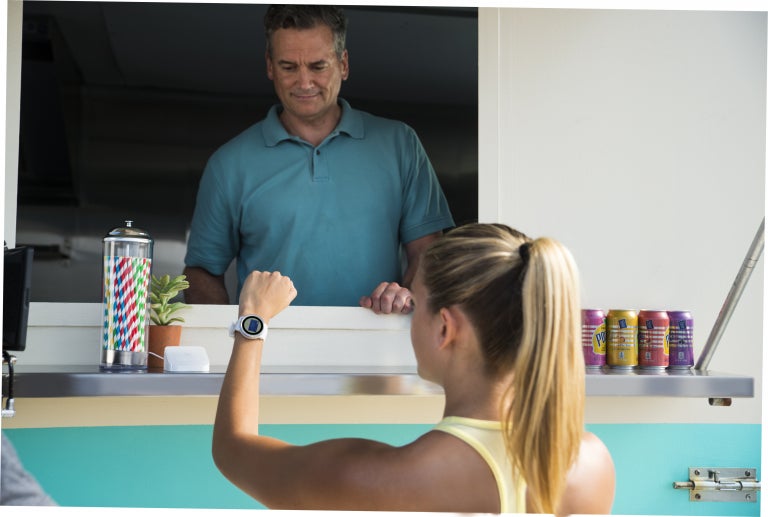 Enough with the excuses, going out for a run has never been easier. Well, except for the actual running part.

All the rest has been solved by sportswear, technology and then the two combined, wearable technology. Even buying a juice on the way home couldn’t be simpler.

Most smartphones now come with some kind of payment app, so if you like to run with your phone then you’ll want to set up Apple Pay, Android Pay, Samsung Pay or Google Pay.

Better still, you could leave the phone with your wallet when you have wearable payment technology. As an emerging industry, many brands are teaming up with banks to come up with solutions, however not all of them will be resistant to sweat, track your activity or play music.

Here are some of the best options out there.

Garmin is one of the leading companies for specialized navigation and wearables. Its latest Forerunner 645 Music allows you to download up to 500 songs and connect with Bluetooth headphones. Garmin Pay is new and it works with most major card companies such as Visa and Mastercard. With the advanced running dynamics, such as the ground contact time balance, stride length, vertical ratio and more, this is a wearable for serious runners.

Apple Watches have been around for a while but the Series 3 is an impressive sports watch. It comes with GPS and altimeter so you can have detailed readings of your mountain hike. It syncs with Apple Music so you can listen to your favorite playlists. More than just an activity tracker, if you activate the SIM card it’s a smaller version of your iPhone.

Fitbit has made a name for itself with its simple fitness bands, however now it is competing in a new category, connected watches. This new player syncs to your device, whether it be Android, iPhone or Windows using Bluetooth, so you can monitor your progress and check out your health stats on the Fitbit dashboard.

Last but not least, the latest smartwatch from Samsung. Another example of how to stay connected to the world with a “miniature” phone on your wrist, should you choose to have 4G LTE connectivity. And should your run start to be too much, you can even hail an Uber and then pay with the Samsung Gear S3. JB

What to do post-run to maximize your results

8 marathons to run before summer