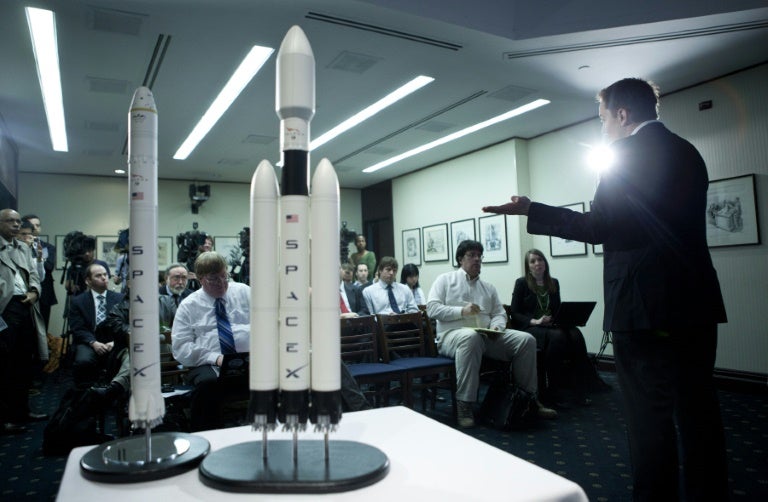 SpaceX’s Elon Musk presents the model of the company’s Falcon Heavy rocket in 2011, the real version of which was test-fired January 24, 2018. Image: Brendan Smalowski / Getty/AFP

SpaceX on Wednesday test-fired its Falcon Heavy rocket for the first time in a launch pad experiment aimed at giving its main engines a trial workout before blasting off in the coming days.

Touted as the “world’s most powerful rocket,” the Falcon Heavy is designed to one day carry crew and supplies to deep space destinations such as the Moon and Mars.

“Launching in a week or so.”

The Falcon Heavy is essentially three of the California-based company’s Falcon 9 rockets put together, with 27 Merlin engines instead of nine.

Wednesday marked the first time SpaceX fired all 27 engines at once.

A date for the launch has not yet been revealed.

On its maiden voyage, the Falcon Heavy will be loaded with Musk’s own cherry red Tesla roadster as it aims for an orbit around the sun.

The orbit should be about the same distance from the sun as Mars, but would not take the rocket very close to the Red Planet.

That is, if the rocket makes it that far.

“Will be in deep space for a billion years or so if it doesn’t blow up on ascent,” Musk, the famed space enthusiast and Internet tycoon, said on Twitter last month.

In an interview with astronomer and blogger Phil Plait, Musk went even further.

“Just bear in mind that there is a good chance this monster rocket blows up, so I wouldn’t put anything of irreplaceable sentimental value on it,” he was quoted as saying. AB

Thirsty rocks may contain the missing water of Mars