A mannequin “Starman” sits at the wheel of a Tesla Roadster in this photo posted on the Instagram account of Elon Musk, head of auto company Tesla and founder of the private space company SpaceX. The car will be on board when SpaceX launches its new rocket, the Falcon Heavy, from the Kennedy Space Center at Cape Canaveral, Fla., scheduled for Tuesday, February 6, 2018. (Courtesy of Elon Musk/Instagram via AP)

CAPE CANAVERAL, Fla. — SpaceX is bucking decades of launch tradition for the first test flight of its new megarocket.

The Falcon Heavy is set to become the world’s most powerful rocket in use today when it blasts off from Florida’s Kennedy Space Center on Tuesday, February 6, 2018. None of the usual no-big-deal-if-it’s-destroyed launch ballast — like steel or concrete slabs, or mundane experiments — for this curtain raiser.

Instead, the rocket will be hauling a red sports convertible with a space-suited dummy at the wheel and David Bowie’s “Space Oddity” on the soundtrack. It is the inspiration of Elon Musk, the high-tech, science fiction-loving maverick who heads SpaceX and electric carmaker Tesla.

On the eve of the launch, Musk said that he is at peace with whatever happens, be it a successful test flight or an explosive failure.

“It’s guaranteed to be exciting, one way or another,” Musk said on Monday in a phone conference with reporters.

Musk said he normally feels “super stressed out” the day before a launch.

The hope is that any failure comes far enough into the flight “so we at least learn as much as possible along the way,” he added. 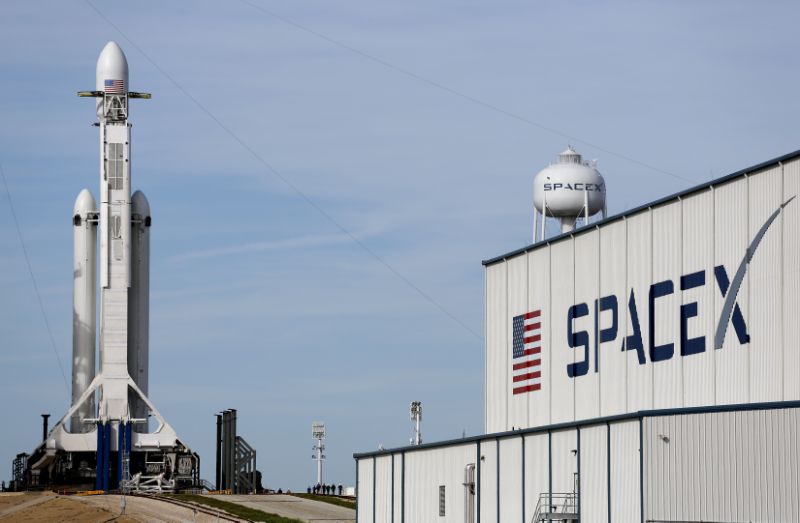 A Falcon 9 SpaceX heavy rocket stands ready for launch on pad 39A at the Kennedy Space Center in Cape Canaveral, Fla., Monday, February 5, 2018. The Falcon Heavy scheduled to launch Tuesday afternoon, has three first-stage boosters, strapped together with 27 engines in all. (AP Photo/Terry Renna)

The Falcon Heavy has three first-stage boosters, strapped together with 27 engines in all. Stretching 40 feet (12 meters) at the base and standing 230 feet (70 meters) tall, the Heavy is a triple dose of the Falcon 9, which is the company’s frequent flyer with just a single booster.

At lift-off, the Heavy packs about 5 million pounds of thrust that is more lift-off punch than any other rocket currently operating in the world — by a factor of two — but less than NASA’s old space shuttles and Saturn V moon rockets.

Two of the Heavy’s boosters are recycled; they have flown on previous Falcon 9 launches. Once spent, they will aim for side-by-side vertical touchdowns at Cape Canaveral. The brand new, center core will attempt to land on an ocean barge.

Musk also runs the electric carmaker Tesla. So in a bit of cross-marketing, he has put his own cherry-red Tesla Roadster on the Heavy’s inaugural flight. It is one of the car company’s original Roadsters.

No car has ever rocketed into space before, if you do not count NASA’s Apollo-era moon buggies, still parked on the lunar surface.

The Federal Aviation Administration had to sign off on the Heavy-Tesla combo. It is at the top of the rocket, enclosed for lift-off. The protective cover will drop away, allowing the car to travel on its way. According to Musk, three cameras are mounted on the Roadster that should provide “some epic views if they work and everything goes well.”

SpaceX is targeting a long, oval orbit around the sun for the Roadster that will take the car as far out as Mars, and have it making laps for a billion years. If the convertible makes it into space in one piece, it still must endure several hours of deep-space coasting through the high-energy Van Allen radiation belts encircling Earth.

Musk said on Monday that the car could come fairly close to Mars and that there is an “extremely tiny” chance it could crash into the planet. But he quickly added: “I wouldn’t hold your breath.”

Musk is intent on establishing a city on the red planet, with hordes of Earthlings and building materials flying there on a super-extra-mega SpaceX rocket that is still in development.

The Falcon Heavy is flying from the same launch pad used by NASA to send men to the moon. SpaceX leases Launch Complex 39A from NASA. Not only did LC-39A, as it is known, serve as the departure point for all the Apollo moonshots from 1968 to 1972 it was also the scene for most of the space shuttle lift-offs.

The LC39-A’s location at Kennedy Space Center keeps people at least three miles away, a distance determined by NASA in the 1960s to be safe just in case the Saturn V exploded on the pad.

SpaceX already has customers lined up for the Falcon Heavy. The rocket is designed to hoist supersize satellites as well as equipment to the moon, Mars or other far-flung points. The private company’s online flight manifest shows the United States Air Force as already signed up.

SpaceX has changed its mind about carrying people on the Heavy, Musk said, preferring to use the super-duper rocket under development.               /kga