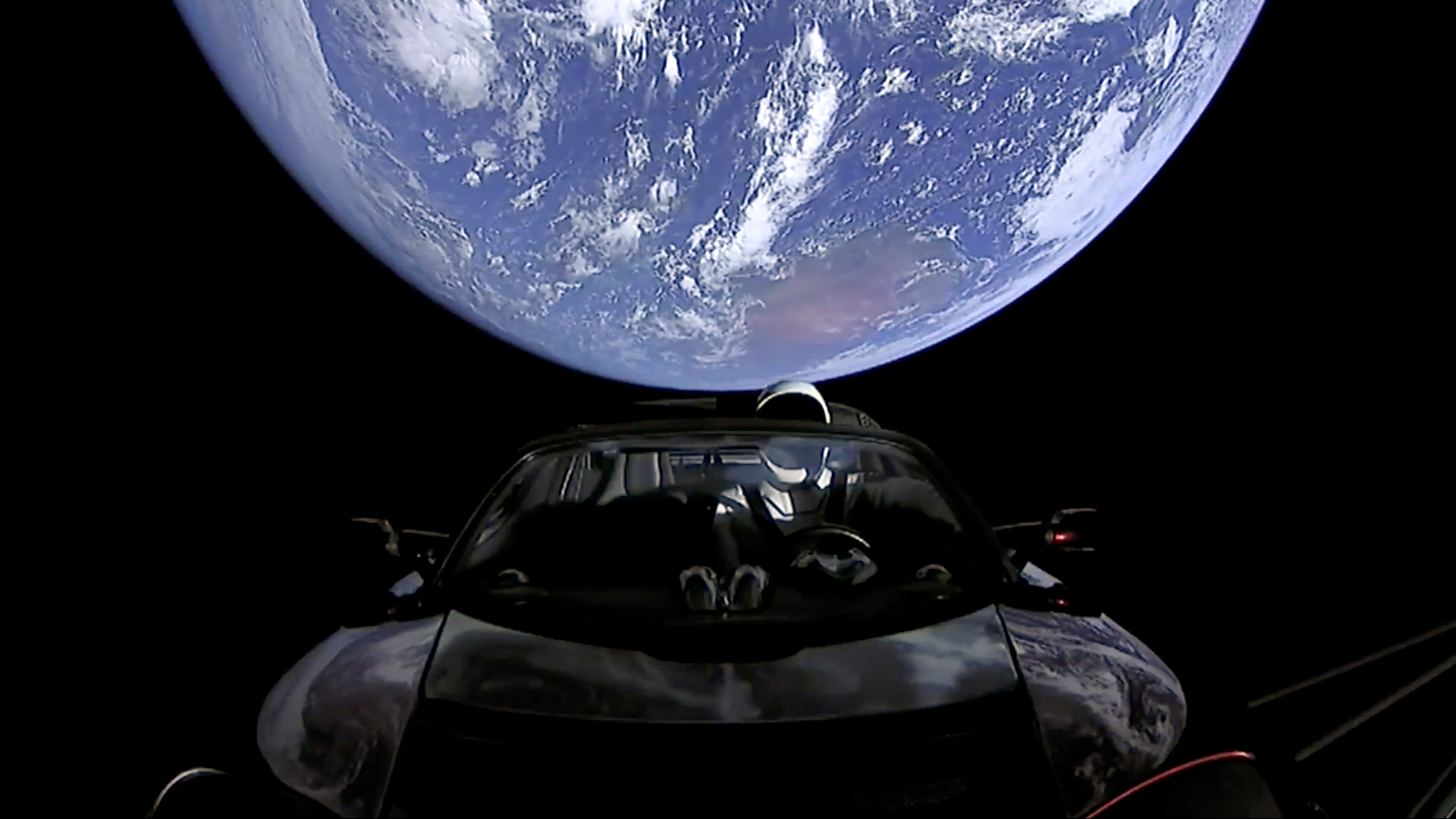 This image from video provided by SpaceX shows the company’s spacesuit in Elon Musk’s red Tesla sports car which was launched into space during the first test flight of the Falcon Heavy rocket on Tuesday, Feb. 6, 2018. AP

With the successful launch, the Heavy became the most powerful rocket flying today.

And Musk’s Roadster became the fastest car ever, hurtling off the planet and zooming away on a route that will now take it all the way to the asteroid belt between Mars and Jupiter.

Late Tuesday, Musk said the final firing of the rocket’s upper stage put his car on a more distant trajectory than anticipated. Not only is it headed toward Mars, but almost to the dwarf planet Ceres in the asteroid belt.

A mannequin dressed in a “real deal” SpaceX spacesuit — dubbed “Starman” by Musk — is strapped in behind the car’s wheel. Usually test flights carry nothing of value, like concrete blocks. Musk found that “boring” and put his cherry-red Tesla on top. He’s in charge of the carmaker as well as the private space company.

Images of the exposed Roadster and “Starman” — named after a David Bowie song — against the backdrop of our blue planet, were burning up the internet long after Tuesday’s launch.

“I think it looks so ridiculous and impossible. You can tell it’s real because it looks so fake, honestly,” Musk said Tuesday night. “It’s still tripping me out.”

The Roadster is in an even more elongated orbit now that stretches from Earth on one end, all the way to the neighborhood of Ceres on the other. The original plan had the car traveling only as far as Mars, coming close to the red planet but hopefully not nicking it. If it survives the swarming asteroid belt, the car and its occupant are expected to continue orbiting for millions if not billions of years.

Like so many others, Nasa astronaut Ricky Arnold was awe-struck by the livestreaming of “Starman” and his ride. Arnold is preparing for his own ride to the International Space Station next month.

“Perfect day for a cruise in a ragtop,” Arnold tweeted, offering congratulations to SpaceX. “Awesome! At this speed, two hands on the steering wheel please #Starman.”

And Buzz Aldrin, second man to step onto the moon, also celebrated after watching the rocket soar “from my favorite launch pad.” The Heavy lifted off from the same spot as NASA’s now-retired but more powerful Saturn V moon rockets and space shuttles. The Heavy is a combo of three Falcon 9s, that SpaceX uses to ship space station supplies and launch satellites for its customers.

Mars is driving all of Musk’s space efforts.

Musk said he doesn’t plan to fly people on the Heavy — that will mainly be used to launch supersize satellites. But he’s accelerating development of an even bigger rocket for deep-space crews — “a beast.”

His overriding goal is to establish a city on Mars, sending people there in a flotilla of SpaceX spaceships launched by colossal SpaceX rockets. Before dashing off to the red planet, Musk said he’d want to try out this spaceship in orbit around Earth — possibly in three to four years  with the supersize rocket — and then the moon.

At a news conference Tuesday night, Musk told reporters that as early as next year, he may begin test flights of the mega spaceship in Texas. These short hops would take the ship several miles high and then come back down for a landing. It’s the landing part that’s especially hard, he noted, especially at the speed the craft will be traveling when it comes in for a touchdown on another planet.

Tuesday’s success of the Heavy provides a confidence boost to these future plans, Musk said. Two of the three first-stage boosters flew back for side-by-side landings; the third was lost at sea.

Rocket recycling is the key to SpaceX’s launch cost-cutting strategy. The Falcon Heavy is price-listed at $90 million, a bargain in the business of rockets.

The president of the Mars Society, a space advocacy group intent on exploring and settling Mars, cheered SpaceX’s achievement — and reduced price. “This is a revolution,” Robert Zubrin said in a statement. “The naysayers have been completely refuted.”

In the meantime, with the Heavy demo out of the way, Musk said SpaceX is putting its commercial crew effort for NASA front and center. He said the company is still on track to launch astronauts in a SpaceX Dragon capsule, aboard a Falcon 9 rocket, at the end of this year.

SpaceX is competing with Boeing to be the first to send Americans into orbit from U.S. soil again, something that hasn’t happened since NASA’s last shuttle flight. U.S. astronauts have been riding Russian rockets, costing taxpayers tens of millions of dollars a seat, to get to the space station since the shuttle program ended in 2011.

Musk noted that SpaceX used only internal funds to finance the Heavy, investing more than $500 million in developmental costs. He’s hoping that will encourage other companies and countries “to raise their sights and say, hey, we can do bigger and better, which is great.”