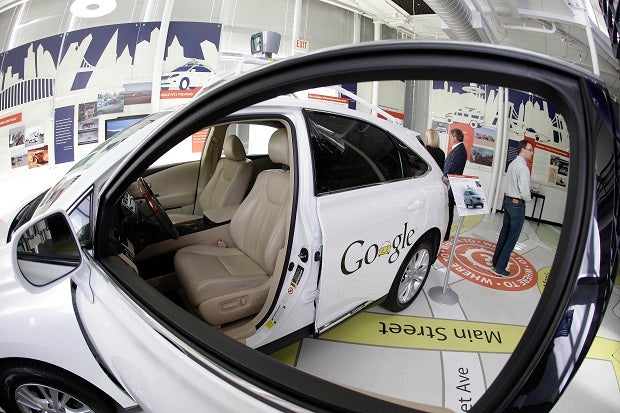 This May 14, 2014 photo shows a Google self-driving car on exhibit at the Computer History Museum in Mountain View, California. (AP Photo/Eric Risberg, File)

SAN FRANCISCO — Uber is paying $245 million to Google’s self-driving car spinoff to end a legal brawl that aired out allegations of a sinister scheme that tore apart the once-friendly companies.

The surprise settlement announced on Friday came as lawyers for Uber and Waymo, a company hatched from Google, prepared to wrap up the first week of a trial that had attracted international attention.

Waymo filed its lawsuit nearly a year ago, adding to Uber’s woes with allegations of a bold high-tech heist orchestrated by its former CEO, Travis Kalanick, and a former Google engineer. That engineer, Anthony Levandowski, subsequently went to work for Uber, and was later fired when he declined to answer questions about the theft charges, citing his Fifth Amendment right against self-incrimination.

Uber’s acknowledgement of rampant sexual harassment within its ranks, a yearlong cover-up of a major computer break-in, and the use of duplicitous software to thwart government regulators had already tarnished the company and its ride-hailing service.

As with most settlements, the truce required some compromise by both sides. Uber had initially offered to settle the case for $490 million just before the start of the trial on Monday, but that agreement did not provide Waymo with enough assurances that its technology would not be improperly used, according to two people familiar with the thinking of both parties in the lawsuit.

The people asked not to be identified because the settlement talks were confidential.

Not long after Thursday’s trial proceedings ended, the top lawyers from both companies, Uber’s Tony West and Waymo’s Kevin Vosen, met to hammer out an agreement. The resulting compromise cut Uber’s payment in half, but provided Waymo with the guarantees that it wanted to prevent its technology from being used in Uber’s autonomous cars.

The payment, to be made in Uber’s stock, is a fraction of the nearly $2 billion in damages that a Waymo expert had estimated Uber’s alleged theft had caused. But United States District Judge William Alsup had refused to allow Waymo to use that figure in the trial.

“This has the look of two companies trying to snatch victory from the jaws of defeat,” said Dan Handman, a Los Angeles lawyer specializing in trade secrets for the firm Hirschfeld Kraemer. “You try to structure a settlement so both sides can spin it as a win-win situation.”

A settlement in the middle of a trial is highly unusual, but both companies had motives for doing so in this case.

Kalanick, a polarizing figure who resigned as Uber’s CEO in June 2017, had already spent part of two days on the stand reviewing old texts between him and Levandowski indicating that they were willing to go to any lengths to catch up with a self-driving car project that Google started in 2009.

The texts included snippets such as “second place is first looser (sic),” ”burn the village,” and a link to a video clip from the 1987 film “Wall Street” featuring a character hailing the virtues of unbridled greed.

Levandowski was also set to take the stand on Monday, when he was expected once again to repeatedly take the Fifth, a move that Uber’s lawyers feared would prejudice the 10-person jury against the company.

“The optics of someone not wanting to incriminate himself in front of a jury in a civil case are terrible,” Handman said.

Uber’s settlement won’t necessarily help Levandowski, though. The U.S. Justice Department opened a criminal probe at the prodding of Alsup, although it hasn’t publicly identified the targets of that investigation.

Waymo alleged that Levandowski heisted its technology and took it to Uber via a startup he founded and which Uber purchased a few months later for $680 million. Uber denied using any Google technology to build a fleet of self-driving cars.

Including the settlement, the cost of that Otto deal is now nearly $1 billion, without factoring in Uber’s legal bills in the case. It is a deal that one of Uber’s own attorneys acknowledged the company now regrets.

“Knowing everything we know, Uber regrets ever bringing Anthony Levandowski on board,” Uber lawyer William Carmody told the jury in his opening statement. “And the reason they do so is because for all his time at Uber, all Uber has to show for Anthony Levandowski is this lawsuit.”

But the settlement at least removes a dark cloud that Uber did not want looming when it offers its stock to the public — something its current CEO, Dara Khosrowshahi, plans to pursue next year. The settlement also covers more than 100 other trade secrets that Waymo alleges Levandowski stole.

Waymo could have filed additional claims against Uber in the months and years ahead, but that would no longer be a possibility unless Waymo finds additional evidence of Uber using its technology.

“If you are an Uber investor, you should be pleased with the outcome, given what could have happened if they had lost,” said Rohit Kulkarni, managing director of SharesPost, a research group focused on privately held companies.

For Waymo, the settlement protects the technology that has vaulted it into the early lead in the self-driving car market and provides a measure of personal vindication for Google co-founder Larry Page, who is now CEO of Alphabet Inc., the parent of both Waymo and Google.

According to Kalanick’s testimony, Page had become “very upset” in 2015 when he learned Uber had hired robotics engineers from Carnegie-Mellon University in Pittsburgh for its own self-driving car division.

“He sort of was a little angsty and said, ‘Why are you doing my thing?'” Kalanick recalled.

The settlement also means Page would not have to appear on the stand himself.

Alphabet had another reason to settle. It was an early investor in Uber and, although it sold some of its stock late last year, it still holds a significant stake in Uber. The settlement gives Alphabet an additional 0.34 percent of Uber’s outstanding stock.

“We are committed to working with Uber to make sure that each company develops its own technology,” Waymo said in its statement.   /kga